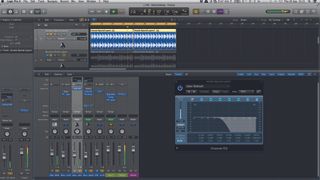 When most people think of sidechaining (or ducking) it conjures up images of pumping basslines and commercial House hits. The truth is there is much more to sidechaining than simply ducking a bassline in time with your kick drum. If you trace it back to its roots you'll find the process was used more as a functional tool than a creative effect.

One example of this is de-essing. The removal of sibilance from a vocal line is now usually handled by a 'de-esser' but this is essentially a sidechain compressor with a low pass filter thrown into the mix.

A sidechain capable compressor can be used as a de-esser by using the vocal as its own key input; this in turn ducks the high frequency content when detected by the low pass circuit. This is essentially the internal design of a modern de-esser but shows the flexibility of sidechaining. When you begin to realise that any audio source in your mix can be used as a key input for your sidechaining and that the ducking effect can be applied to any destination you should start to realise the real power of the process.

In this tutorial we'll take a look at an area in which sidechaining can be used that you may not have thought about: rather than creating more traditional compression based ducking effects, you can try using sidechain routed gates. Although the method of set-up is more or less the same, the end result is more like a sequenced trance gate.

The beauty of using a programmed percussion part to trigger a gate is that you can create an effect that matches the groove of an existing project element exactly. In the video example we use an audio loop but MIDI can also be used and minute details can be programmed to create more complex parts if needed.

This is not only intended to show you how to set up a sidechained gate but also it should start you thinking about the alternative uses for sidechain routing and helpyou move away from hammering that compressor. For loads more on advanced sidechaining techniques, grab the November issue (FM 272).

Step 1. Start off by isolating the part you want to treat with your sidechained gate. Sustain based sounds like pads or strings tend to work pretty well with this sort of effect. At this point you can insert your gate plug-in - as long as it supports sidechaining you're good to go.

Step 2. Now you'll need a part to use as your trigger for the sidechain input. Percussion parts with clear dynamic signatures work well here. An audio loop has been put in place here but MIDI parts can also be just as effective and often easier to edit.

Step 3. Now route the new percussion part to the sidechain input (or key input) of your gate plug-in. The method here may vary slightly from one app to another but the result should be the same. Check that your routing is correct and you're ready for the next step.

Step 4. Your initial gate setting may be a little rough and perhaps a little harsh in nature. In the audio clip you can hear the percussion part and pad parts used in isolation. This gives you a very clear idea of what's possible here.

Step 5. Now fine-tune your gate settings. This will mainly consist of tweaking the threshold and release parameters. Longer release times will result in a smoother pattern and give you a more organic effect. You should hear the difference in the audio clip.

Step 6. Finally try adding some effect to the mix. Delay and reverb work especially well with gated patterns like this one. A stereo delay line should also widen things up a touch and add some space. A subtle delay has been added to our audio clip on the DVD.