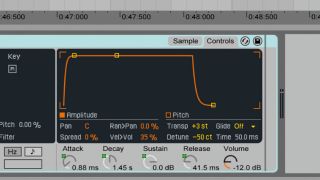 Tuning your kick is a vital part of the process.

There are many production tricks for curing kick and bass problems, but nothing beats choosing the right sounds and programming them appropriately to begin with. If your bass is deep and boomy, your kick should be punchier and thinner, and vice versa.

Another vital consideration is the musical key of your elements. If you've decided that your bass part will be assuming the low-frequency role in the mix, then you'll need to ensure that at least some of the notes in the bass riff reach low enough. For example, many DnB tracks are written in the key of E and F, meaning that a sub bass hitting the track's root note is guaranteed to shake subs and sound systems.

That isn't to say that you can't write a track in a higher key, of course, as long as you make sure a few notes of your bass riff descend into lower registers now and then. The opposite is also true: if your kick is taking the lead subsonic role in your track, then it may benefit you to program your bass (and track) in a higher key such as A-C, or transpose them if you've already begun writing.

Another thing to listen for is phase cancellation when your kick and bass are playing at the same time. If you aren't sure whether this is happening, solo the kick and bass and program one kick with the bass
and another without. If the kick sounds less punchy when it strikes with the bass, it's phasing. Try reversing the phase of one or the other, or, if that doesn't work, some of the other tricks below.

Naturally, the most obvious problems usually occur when kicks and bass sound at exactly the same time, and so in the walkthrough below, we look at simple solutions, both for avoiding problems in the first place and fixing them once they're made. Don't try to force a solution, though - if it isn't working, follow these steps, and if none of them work, ditch your bassline and try something else. You should never settle for second best when it comes to kick and bass!

Step 1: One of the most obvious ways to prevent kick and bass clashes is to avoid having the two playing at the same time A great example of this is the classic offbeat disco bassline, such as we have here. This can be quite linear, though, so we can inject a touch of funk by adjusting note lengths or adding a few extra notes in the gaps.

Step 2: We can't always avoid bass notes playing at the same time as the kick, but we can minimise clashing or groove disruption by transposing the clashing note up or down an octave. Lower often prevents an apparent gap in the weighty end of the frequency; higher adds an audible twist on the groove. Here, we've gone for an octave up, and have reduced the velocity of this note for groovy bounce.

Step 3: A more involved way to minimise clashing is to copy your bass channel, delete all notes except those landing on the kick, then delete the opposite notes in the original, leaving you with 'bass' and 'bass clash' channels. On the clashing channel, try filtering or other processing. Here, we've EQed out some low bass and stereoised the high note. You may need to adjust the note length to suit the effect.

Step 4: Try offsetting the timing of the bass channel (about 1-5ms) to minimise transient collisions between kick and bass. A little earlier usually adds energy, while making them a bit later generally makes things more laid back. We've moved our clashing high note later by 1ms and pull low notes (which don't fall on a kick) earlier by 3ms.

Step 5: Once we have our bassline, it's time to tune the kick. If the kick is too high or low, try transposing up or down an octave. If the kick isn't working after that, it's time to use a different sample - it's usually incredibly hard, if not impossible, to get mistuned kick and bass to sit nicely together.