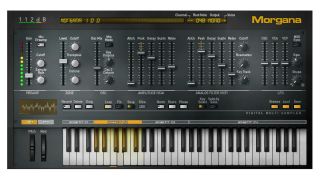 If you're looking to get creative and take a sound out of its original context, you'd better become familiar with the sampler. Simply put, if you load a sampler with a segment of audio, and you're then able to play that sound up and down the keyboard, as well as manipulate the sound with functions similar to those you'd find on a synthesizer.

Once you've loaded a sample or recording, try out different sample start and end points as you audition the sound. Most samplers allow you to alter these, as well as loop up a small region of an audio file, creating a sustained tone from just a short snippet of audio. If you set a small enough loop length, you'll create a buzzing tone that can be tuned to a musical pitch, turning your sampler into a granular synth.

Experiment with the start/end points and loop lengths, as some creative textures and tones can be created by automating these parameters over time. A 'crossfade' function will generally be on hand to fade the beginning and end points, automatically removing any clicks.

When altering sounds for a different purpose, make sure you investigate the envelope features and modulation routings available in your sampler of choice. By altering a sound's amplitude envelope, for example, you can create short percussive hits from unlikely sources such as field recordings or even vocal tracks. Creatively modulating a sample's pitch with LFOs or envelopes can generate pitch-falling drum hits or whirring uplifter tones.

A combination of sampled signals and synthesized tones can provide a sound designer with a broad palette of options. This kind of architecture was featured in many late '80s and early '90s hardware instruments - from Korg's M1 to Roland's D-50 and many more besides. You can stack sampler channels and synth instruments in your DAW, or dedicated plug-ins such as Steinberg's PadShop Pro and Camel Audio's Alchemy merge synths and samplers into one single software instrument. It's easier than ever to add a clean, powerful sine sub under your sampled tone, or some synthesized white noise over a dull recording.

For a complete guide to creative sound design check out Future Music issue 281, which is on sale now.