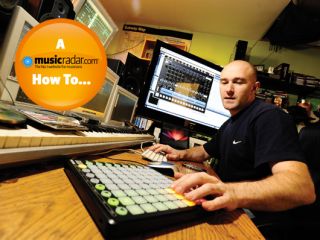 Alex Blanco has remixed under a variety of pseudonyms.

Alex Blanco is a producer, remixer and DJ based in West London. He has been releasing tracks for ten years, taking on remixes for major labels like Polydor, Island and Mercury and for top ten artists such as Gabriella Cilmi, Just Jack and Simply Red.

He also produces and remixes under a variety of pseudonyms with people like Seb Fontaine, Jon Carter and Oliver Lang for a string of independent labels.

We asked him what it takes to succeed in the remixing world.

What projects would you rate as being your best to date?

"One favourite is a remix of Solution by Superbass (Toolroom Records) that I did with Seb. Superbass are two friends called Paul Harris (Dirty Vegas) and Jules Vern (Stretch & Vern), and I just love the way we reworked their already beautiful track into a big-room record but completely kept the vibe. A proper remix!

"For major labels, it's definitely got to be my remix of Stare Into The Sun by Graffiti 6, done before the track was used in a big TV campaign for the Sun newspaper. Back then it was still credited as Jamie Scott & The Town. Again, the original is great, so I just took it up a notch!

How did you get into remixing?

"One of the first remixes I did was ten years ago for a remix competition in The Mix [a now-defunct music production magazine]. They gave feedback in the magazine and said our mix started with great promise before going "tits-up retro-style"! But we had confidence in the track and had only used the lead riff from the original (which we didn't like anyway), so we changed the notes and got it signed as a double A-side to another label. They put out a string of my tracks, eventually, and that one ended up being one of my most popular releases and got great reviews, so that just goes to show - don't let rejection put you off, even if it's from the experts!"

Where do you draw the line between remixing and production?

"The trick is finding a balance between giving a remix project your all and giving all your best ideas away. If it's a vocal mix it's pretty simple, as you can approach it in exactly the same way as you'd approach any vocal track. If not, things can be tricky. My tip is to recycle lots from your other productions - not riffs, but some of your current favourite bass presets and drum samples. No label will mind, as they're commissioning you because they like your stuff.

What qualities, skills and knowledge does a good remixer need to have?

"A good remixer needs to listen to clients and have good people skills. If you do enough remixes, at some point you are going to come up against a label representative who hasn't got a clue, so you need patience to deal with them. More importantly, you also need to listen and be open-minded. The client is paying the bills, so they get to call the shots.

"Remixing can lead to the soul-destroying experience of having to send off something you don't actually like, or have grown to hate. It doesn't happen often, but it's never nice when it does. If it does, take the money and either do your own edit to play or put it at the back of a cupboard and never think about it again!"

How do you get work?

"Getting work is largely a matter of determination and networking - the best way by far is to concentrate on making waves with your original productions. Repeat business is simply about being consistent and reliable, and keeping in touch with former and potential clients."

How long do you have to complete a typical project?

"Anything from a couple of days to a couple of months, but I try to sit down and dedicate some full days while the commission is still fresh. If you leave it until the last minute, you might find yourself at the mercy of creative block. With some decent and inspirational material, you should be able to put out a good remix in maybe two or three days."

Do up-and-coming producers have to do remixes on spec?

"If you are just starting out and haven't had a hugely successful release of your own, that is almost certainly what will happen."

How does a typical project go down?

"I always start by listening to the original track and picking out bits I like. Major labels supply complete multitrack stems, and I go through them all first so I don't waste time converting parts I'm not going to use!

"Then I compile a folder of the original parts I think I might use, and the parts I regularly use (kicks, hats and so on), and start to make a track! It's just like taking bits off a sample collection and basing a track around those. Speaking of which, when you are working to a deadline, sample collections are your friends!"

What else is in your setup?

"Ableton Live used to be my essential remixing companion, as it allows you to try things out quickly, which is especially good with remixing as you aren't getting paid by the hour. It's also great for shifting tempos - another remix essential.

If I could only have one tool in addition to my main sequencer, however, it would be Propellerhead's Record. The timestretching is mind-boggling. When I first fired it up, I took the tempo of a demo track from 158 to 113, in real time, and it still sounded cool! I've never seen or used anything that timestretches remix parts so fast or so effectively."

How much money can a remixer earn?

"Even without being famous, with the right contacts and some good groundwork, it's possible to earn between £400 and £1,500 for a remix - if you're lucky. If you're a big name, that figure can be much higher.

"The money has plummeted somewhat as the market has become saturated and illegal downloads have taken hold, however. For the major labels, remixes are a promotional expense designed to raise their artists' profile, so these labels have more to spend on them - getting your foot in the door can be tricky, though, and even the big labels have much less money to throw around now.

"As for the independent labels, much of the work will be on spec at first, so be ready for that. And be prepared to do remix swaps, if you have a label, or work for free to get your name out there. It's a valuable way to get your stuff released and build your profile - and as people like Tocadisco and Armand Van Helden have shown over the years, one big remix can catapult a career into the limelight.

Dream of a career in music production? Get the brand-new Computer Music Special: How To Make It In Music, out now, to find out how to make it a reality.

How to remix a breakbeat track with Ctrl-Z