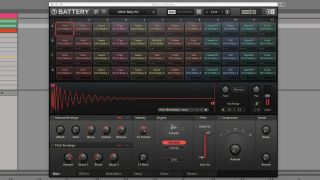 "Sampled breaks aside, drum fills as dense as this aren't common in electronic music."

We've shown you how to program an authentic acoustic drum fill from scratch elsewhere on MusicRadar, and in this tutorial we're going to use that sequence as the raw rhythmic material for an alternative fill better suited to a dance music track.

We're making our fill with Ableton Live and Battery 4, but any combination of DAW and drum machine can be substituted if you don't have either or both.

Pick up the July edition of Computer Music (CM231) for even more advice on drum fill design.

Step 1: Sampled breaks aside, drum fills as dense as this one aren't common in electronic music; but let's see what mileage we can get out of it in a four-to-the-floor context, even if just as the foundation for something more genre-appropriate. Here's a straight-up four-bar house-style groove triggering Battery 4's Glitch Baby Kit.

Step 2: Replacing the last bar with the notes from our fill results in a random selection of sounds being triggered in Battery. To match the original voicing, we repitch the three tom notes to trigger three of Glitch Baby Kit's tom sounds, and move all the snare hits to the same note. We also delete the pedalled hi-hats.

Step 3: We're after mechanical precision here, not human looseness, so we quantise the fill. This has the side effect of turning the snare flam into a single hit, which we prefer anyway in this setting. The snares
in general are way too overbearing, in fact - moving the offbeat ones up to the low tom transforms the vibe.

Step 4: The snares on every beat are still a bit much, so we elect to move them up to an open hi-hat sound - different to the one in the groove - then shift them to the offbeat. A drummer couldn't play this in real life, but that doesn't matter with such an overtly electronic part. The kick drums at the end of the fill aren't really working for us, either, so we move one to the last beat and delete the other.

Step 5: Continuing the four-to-the-floor kick through the fill works well, but it all now ends too abruptly, so we draw in four more 16th-note toms to carry it to the end of the bar, and delete the tom in between beats 3 and 4 for a bit of syncopation. The end result sounds nothing like the fill we started off with, but the essence of it is still there in the shape of the tom pattern.

Step 6: That's the conservative approach, then, emulating 'real' toms with electronic ones; but when it comes to dance music drum fills, you don't have to stay anywhere within the bounds of realism. It takes no time at all to completely change the sound of our fill by moving the three sets of tom notes to a far more interesting trio of noises!