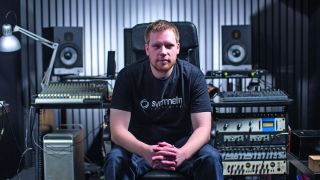 The DnB producer's DnB producer and Symmetry label boss Break (known to his mum as Charlie Bierman) was keen to create a custom breakbeat for us using XLN Audio Addictive Drums 2's state-of-the-art virtual drumming and some sliced-up "vintage" breaks from the CM  sample repository. We were only too happy to let him...

Why did you want to create a break using Addictive Drums 2?

"Over the last ten or 15 years of producing, I've gone through a lot of the classic breaks, and there are always more breaks to find out there, but it's that freedom of being able to create your own. It's not quite the same, but it gives you more control to create that drum kit you'd imagine.

"I've used Addictive Drums for a couple of years, and there are times when you get beats that do sound like breaks - you can get pretty close to emulating that. So, it's the opportunity to do it yourself and be in control."

Many soundware developers have made attempts to create vintage-style breakbeats. How successful do you think they've been?

"I probably haven't heard all the packs, but I think they've done pretty well, and there's certainly some I've used and some I've really rated. The thing is, if you're trying to make a new break and you've got Funky Drummer in your head, you've missed the boat already - I haven't heard one that's like Funky Drummer that's better than Funky Drummer!

"I've done drum recording myself, and I think everyone should give it a go. It's a really good challenge... there's no reason someone can't come up with a new Amen or new Funky Drummer. It's partly luck and partly the skill of all the people involved."

Step 1: Charlie begins by loading up the Black Room preset from Addictive Drums 2's Black Oyster expansion, and programming a basic DnB rhythm with velocity variation on some of the hats, using Logic's 16B groove to get a funky feel. A duplicate of this track is created so that the original can be referred back to at any time, to assess the improvements being made.

Step 2: Charlie works on the kick first, activating the sound's 'No Alternating Samples' mode and turning down its velocity sensitivity to get a more consistent feel. The kick is pitched up slightly, and Addictive Drums 2's Tone Designer is used to attenuate some of its resonant frequencies. The Volume Envelope's Sustain Time and Release are lowered, giving the kick a snappier sound.

Step 3: The tape saturation emulator is activated, and its Drive and Bottom are turned up, fattening up the kick's sub. A slight touch of fast-attacking compression tames the signals peaks a little, and EQ is applied to take out the unwanted sub frequencies and soften out the kick's 'clickiness'. Charlie also uses the kick's dedicated Cut filter to mellow out the top end.

Step 4: Finally, the kick's Room level is attenuated to get a more direct sound. Charlie turns his attentions to the snare, which is pitched up to make it fast and punchy. The Tone Designer and Volume Envelope are used to smooth and tighten the sound, and the Shape section's Delay is brought down to make it snappier.

Step 5: Drive is applied to crunch the snare up a tad, and the Compressor is used with a slow Attack to keep it punchy. Charlie also adjusts the Distortion section in AirPressure mode, adjusting the Frequency and Amount to add punch. The EQ section is used to remove some of the snare's ringing frequencies, and the bottom end is brought up to make the snare weightier in the 200Hz range.

Step 6: Charlie tweaks the hats next, pitching them up and adding a little room reverb. Once again, the Volume Envelope tightens them up, then they're turned down slightly in the mix and saturated with the Tape effect. The Cut filter is applied to take out any low-end rumble, and the hats are dulled with EQ to make them about as bright as the snare.

Step 7: Charlie EQs the room reverb to bring out the highs, helping glue the top end of the mix together. The Overheads' mids are brought down to lessen the impact of the snare's ringing frequencies. Charlie uses FabFilter Pro-Q 2 on the Addictive Drums 2 channel to further attenuate the unwanted peaks in the mids, and compresses the signal with Universal Audio's FATSO emulation for UAD-2.

Step 8: Charlie layers the Addictive Drums beat with a chopped-up Vintage Breakbeat sample (from 206's Young Punx VIP Series pack). The dynamics of the breakbeat are tweaked with iZotope Ozone 5's multiband dynamics, and Charlie applies more compression and EQ to both drum parts, which are grouped to a bus for some final glue with Native Instruments' VC 160.