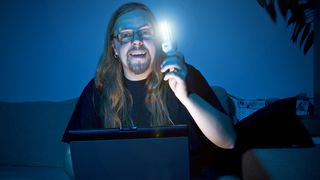 When the well of musical creativity runs dry at any stage of the production process, it can feel like you're banging your head against a studio wall. Hurrah for us, then, and our nonet of tips and tricks, which will see you through those dark times and get you back on your compositional uppers.

For more inspiring walkthroughs and tutorials, grab Future Music issue 306, which is on sale now.

1. The tortoise and the hare

You'll be familiar with the story of the tortoise and the hare. The two animals set out for a race and the hare zooms off into the distance. He's so confident of victory, he stops for a snooze and wakes hours later to discover, to his horror, that he's lost.

There's something useful to remember in this story when comparing the dizzy, heady rush of an inspired idea and the slow process of developing it into something truly musically worthwhile. More often than not, the best tracks aren't written in a blur of one brilliant idea after another with the whole thing done in a few hours flat. Instead, the best ideas are teased out, allowed to develop slowly, with good ideas supported and weaker ones slowly removed as a track develops, and layers of sophistication and good choices making their presence felt in a more gradual way.

Remember this; it's fun to be a hare but being a tortoise is often even more rewarding.

We all suffer from mental blocks when producing music, and at the end of a long day, whether or not to include that new synth line can feel like a huge decision. Go for a walk, give it 30 mins, then go back. Suddenly, that decision will be easy. A fresh perspective is always helpful.

3. Add inspiration to your beats

Thanks to the standardisation of MIDI drum mapping, switching kits still allows you to hear a kick on C1, a snare on D1, and so on. However, sometimes a little randomisation is good. With certain drum plugins, the sounds assigned in the upper octaves (C2-B2, C3-B3, and so on) are less predictable, so copying your beats to a second instrument and transposing the notes to double your 'regular' drum sounds with a smattering of unpredictability can help. Suddenly your kick might be doubled by a weird sound-designed glitch, or your snare might pick up something sustained and unusual.

We've all been there, with 100 great track start ideas on our hard drive and no idea how to get any of them finished. Developing an idea is harder than starting one from scratch - a skill in itself, in fact. Don't give up.

We've all been inspired by something on Spotify/the radio, only to suffer the deflation of firing up an empty project in our DAW and feeling like our own musical beginnings lack the weight and power of that inspirational track. Remember that the track you heard started in exactly the same place that you're in right now. Someone fired up a synth, or hummed something into their phone and, through the following days, weeks or months, that initial idea was nurtured, developed, rejected, re-booted and slowly teased into life. Don't rush - and remember that any good idea is more like a marathon than a sprint.

Tired of your own ideas? Spend time with someone with alternative ones. It's amazing how a fresh approach and different skills can bring out the best in your own ideas.

7. Write in an unusual time signature

Would you be disappointed if you were only allowed to write in C minor from now on? Of course you would. The limitations of everything playing back in the same key - to say nothing of the further rules about which chords readily associate with C minor - would start to feel stale. And yet nearly every piece of commercial music you've ever heard is in 4/4 time. It's the de facto standard for most producers, and almost always the default choice in every DAW. Break out! Switch the time signature in your project to 3/4, 12/8 or even 5/4 and see what happens. You'll feel much freer to program innovative beats, for a start.

Don't let anyone telling you your tracks are weird or unusual get you down. That's the aim! Be proud of your originality.

Imagine your artistic pursuit is drawing. There you are, pencil in hand, sheet of white paper in front of you. That first mark will appear stark (and easy to reject as wrong), as the contrast between the pencil and paper is at its most extreme. If the paper is a different colour, the first line won't seem quite so exposed, as the paper already has a texture - something tangible before you've begun drawing.

Your empty DAW project is the blank sheet of paper. Rather than expose your new idea in a stark, unprotected form, why not fill the musical canvas with some gentle sound first? Apps like Brian Eno's Bloom are great for this.