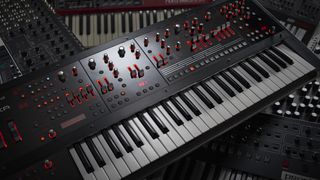 Roland's JD-XA has only been out a few months but it's already gaining a lot of attention due to its powerful and flexible hybrid 'crossover' architecture. We think it's fair to say that it's not immediately apparent what this board is capable of but rest assured, it packs a serious punch!

Firstly, it's a great-sounding four-voice analogue polysynth in its own right, with a sound that harks back to the Juno-106 and Jupiter-6 - it's refined yet lively and it fits in a mix nicely. This engine runs as a single four-part analogue or four independent two-osc-per-voice monosynths.

Then there's a very deep 64-voice digital SuperNatural Synth engine which can be layered with the analogue engine or cross-modulated - it can also be sent through the analogue filters. To top things off, there are extensive modulation facilities, a great-sounding vocoder, a 16-track sequencer that can also control external instruments and a very flexible effects engine.

Here we'll show you how to get the most from your JD-XA with a collection of inspirational tips and tricks. For more, pick up Future Music 301, which is on sale now.

For even bigger basses, stack the analogue engine with the digital and hit unison. For fat, classic basses, use a single two-oscillator analogue part with detuned sawtooths. Add a square or triangle wave on a digital part to act as a sub-oscillator.

For complete separation between the engines when mixing/processing/gigging, use the dedicated analogue output for a pure unaffected feed, while simultaneously employing the main outs for the digital section with effects.

For an authentic EP patch, hit 'variation' when a digital part is selected, then choose one EP waveform (or layer several). Route the sound into the analogue filter via the aux, tweak the amp envelope and filter, add drive for dirt and run the patch through an amp/speaker simulator, adding autopan, reverb, chorus, phaser or compression. Make sure you route velocity to control the amp level. For Clavinet and organ, the same approach applies, but on the Clavinet use autowah, reverb and phaser. For organ, layer several waveforms (to emulate Hammond drawbars and percussion) and add the rotary-speaker effect.

To quickly assign Wheel 2 to any front panel parameter(s), hold Shift and move it The panel lights flash - simply tweak the parameter you want to assign (ie filter cutoff).

5. Getting the best from the vocoder

The JD-XA's very capable vocoder can be applied to any part/sound, analogue, digital or both together. Just plug a mic into the XLR combo jack on the rear and hit the vocoder button. We've got good results with an SM57 but much more clarity with a condenser mic - there's phantom power onboard if you need it.

Also, carefully balance the rear mic input level with the front panel mic volume level to avoid clipping. Experiment with the noise suppressor and the mic envelope/sensitivity parameters for maximum intelligibility. Adding some onboard compression also helps to even out the vocoded sound.

Jump parameter values in 10s by holding Shift and pressing the +/- keys. For super-fast scrolling, hold - then press + or hold (or vice versa).

You might use cross-mod/ring-mod for adding movement or detuning sounds, but at more extreme levels both these modulation types can produce unique, clangorous-sounding tones. Basically, the cross-mod/ring-mod control is a 'sound-crazifying' dial, and it's always worth a quick turn to see how it affects the sound.

There are several handy Shift shortcuts for faster editing listed in the manual, but a more comprehensive, user-compiled list can be found in the JD-XA section of the Roland Clan forums.

9. Putting the icing on the sonic cake

The JD-XA has many options for transforming and polishing your sounds. There's the aforementioned cross/ring modulation, several filters, two powerful audio-range LFOs in the analogue section (each wΩith separate fade-in, pitch, amp and filter sliders), a separate Mod LFO for the mod wheel/mod bender, aftertouch, an extensive mod matrix, and a pitch envelope and PWM on both oscillators.

The digital engine offers four parts with three oscillators (partials) each, with 450 PCM waves and several virtual analogue waves (including a supersaw with detuning). There's a dizzying array of tweakable parameters available, with direct panel control for the most important ones. And whether you're in analogue or digital mode, the front panel controls that are tweakable glow red, so you always know where you're at. It's a sound designer's dream; with so many routes to take when programming, you'll never get bored! Deeper editing of the digital engine does require lots of scrolling and menu diving, though!