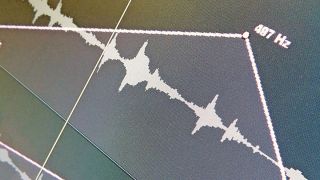 Think of the word 'transition' and you're perhaps more likely to think of the ways in which it's possible to move between scenes of a movie file than you might consider anything to do with music production. But, of course, transitions in music are just as important as their movie equivalents.

How we move from verses to choruses, how we build up tension leading to crucial moments, how we mute parts for extra drama… These are all things that need our attention, so here we'll reveal nine tried and tested techniques that you can use as is or as the basis for your own variations.

For more on musical transitions, pick up the September edition of Future Music (FM308).

Making your whole track drop in pitch and slow down, emulating the 'stop' button on a turntable is a popular trick; some DAWs feature this as an alternative to offline fading on a per audio-file basis. If yours doesn't, this is a straightforward trick to produce. Render the section of audio you want to apply the record-stop effect to as a new audio file. Assign this to your software sampler and set a pitchbend range of two to three octaves. Trigger the sample at the right moment and draw or record downward pitchbend data to 'stop' the sample. Mute the original audio in your DAW so it doesn't play over the top of your record stop effect.

2. Mess with the fabric of time

Creating the perfect break-bar, where you drop key parts of your arrangement, requires careful use of automation. It's one thing to stop live MIDI parts from triggering new notes, but if the sounds they're playing have long release times, the bar will still be full of sound. Similarly, if you have long reverbs in the arrangement, having them continue will diminish their impact.

So, get busy with volume automation, not just on individual instrument channels but on auxiliary return channels as well, immediately cutting volume on the down-beat of the bar, or creating short fade outs right after the bar line.

4. Don't be predictable with your rolls

The snare drum fill is a popular way of building momentum up to a transition, but give the pattern you use to trigger it some thought. We've all heard running 16th-note snares a thousand times, so try something different.

DJs and producers often use filter treatments for transitions between sections of tracks, but you can be more creative than simply applying a low- or high-pass sweep. Band-pass filter treatments can be equally effective.

That said, the issue with single-filter effects is that manipulation of the cutoff frequency can become over-familiar. Using more than one filter on the same track can neatly side-step such predictability, particularly if filters used in series are introduced at different times.

For example, let's suppose you start with a low-pass filter, which gradually sweeps up to let more high-frequency content through as the transition point approaches. If, later in the rise, a second, high-pass filter was employed, you could scoop the bass out of the mix while the high-frequency content builds. By dropping the cutoff of the high-pass filter into the transition point, you'd then let all frequencies through to produce an energy burst just when it's most needed.

If you're too busy to build your own risers, sample libraries such as NI's Rise & Hit, Heavyocity's Gravity and HybridTwo's Project Bravo are bursting with risers, impacts, explosions and other cinematic transition effects.

Following on from tip 3, now that you know how to manage the volume behaviour of instruments, audio tracks and effects returns, the question of which parts to keep in the mix and which ones to drop out comes to the fore.

There is no textbook answer; the world is your oyster. Perhaps it will work to keep a vocal part up to the transition point and drop everything else out. Perhaps the drums will need to be muted to allow other instruments to feel like they're treading a tightrope before the chorus lands. Often, the best instruments to drop are the ones you least expect, so be ready for some trial and error here.

Listen to how DJs transition between tracks. They do it without access to stems or individual parts, so get creative with how to produce seamlessness from contrasting material. This can often provide inspiration.

Delay effects can usually be manipulated so that rather than fading away, the echoes can build up in volume and intensity. These regenerating delays can be an effective way to transition between sections, as long as you're careful with them!

The Feedback control on a delay plugin determines the number of echoes heard, and when it's pushed up, the delays start to regenerate. Left unchecked without automation to bring levels down at the right moment, this can lead to howling feedback, but, with control, regenerating delays of key mix elements can add power and grit across transition points.