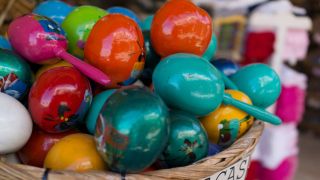 In many styles of music, a basic 'kick, snare and hats' drum beat is the backbone of the rhythm, but that on its own is often not enough to make your track groove. To really get things shuffling along nicely, you'll need to layer up some ancillary percussion parts to add excitement, flavour and groove to your beat.

Good percussion can have a hugely beneficial effect on almost any choon, elevating it both rhythmically and texturally. Even the addition of just a simple conga or shaker part can transform a dull rhythm track into a more complete-sounding, syncopated, 'human' groove, particularly if the main drums are overtly electronic-sounding.

So, fire up that sampler, plug in those trigger pads and get yourself headed in the right direction with this collection of essential MIDI percussion programming (and a bit of effects processing) tips.

Should you quantise your MIDI percussion parts? The answer to that question depends on the sort of feel you're trying to achieve and the groove of the rest of your track. Good percussion parts will usually have a high level of human feel, but a lot of that comes from dynamics and articulation, so don't feel that quantising them will necessarily rob them of their soul. Try it and if it sounds cool, go with it. If it doesn't, make whatever timing adjustments need to be made manually. Be careful when quantising slow-attack sounds like shakers or guiro that they don't actually sound late when snapped to the beat. If they do, move them back a bit.

When programming drum kit parts, you hopefully already know not to ever trigger more things at once than a drummer could physically play with their four limbs, and it shouldn't surprise you to learn that the same rule applies with percussion. Obviously, a conguero can't hit more than two congas at the same time, and you can't strike and scrape a guiro simultaneously. Adhering to such limitations will make your parts more realistic and stop them becoming too dense.

For maximum realism, make sure your sampler patches feature both left- and right-hand strokes (where appropriate), and use them. The difference between them might be barely perceptible, but you'll certainly hear it if you compare a run of alternating notes with a run of the same one repeated.

While percussion parts in dance and electronic music will tend to be looped (whether audio clips or MIDI parts), in 'live' tracks, they should be properly performed all the way through. So, rather than recording eight bars of MIDI-triggered bongos and looping it, put in the effort to play the whole thing live from start to finish, punching in on any unacceptable mistakes afterwards if necessary. Even with rhythmically straightforward parts - a shaker, for example - approaching your percussion tracking like a proper recording session will make a real difference to the feel of the track.

If you've ever programmed a sampled drum kit, you're probably aware of mute/choke groups, whereby certain sounds are set up to immediately kill other sounds when triggered - closed hi-hats curtailing open ones, for example. Mute/choke groups are also used for percussion: muted triangle interrupting open triangle, short cabasa rub defeating long cabasa rub, etc. As a rule, if it's not physically possible for two specific sounds to happen simultaneously, one always needs to mute/choke the other.

Keep your individual percussion layers simple. With such a broad range of sonic flavours and colours in the percussion family, once just a few members of it are brought together, the result is usually a surprisingly dense wall of sound. Always consider the interplay between your different drums, shakers and whatnot. Rhythmically, they should lock together and move around each other - as if your virtual players have been rehearsing for weeks - rather than clashing, with everything hitting at the same time.

Avoid the temptation to place emphasis on the backbeat with your percussion - that's the job of the snare drum. While certain percussion instruments (tambourine or cabasa, for example) make a good accompaniment to the snare, generally you want your perc working around the main beat rather than sitting on top of it.

All members of your percussion ensemble should exist in the same virtual space, so when applying reverb, send all your grooving percussion parts to the same plug-in - using different reverbs on each instrument will mess up the sense of cohesion (although that can at times be an effective technique). For percussion spot effects, however, tailor the reverb to each individual sound according to its own specific needs.

When it comes to panning the percussion section, go for a noticeable spread, but nothing too extreme. You want just enough panorama to give a sense of width without distracting attention from the rest of the instruments in the track, which the percussion should be supporting rather than overwhelming.