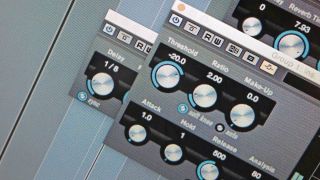 Sidechaining as you've never used it before.

Audio equipment such as gates and compressors will typically feature two signal paths: one being the signal that's being processed, and the other being the signal that actually controls the behaviour. The control signal is usually generated by monitoring the device's input level and is known as a sidechain - however, a lot of processors also offer the option of feeding in an external signal to control the processor's behaviour.

Now, this isn't a new technique by any means but when someone mentions the term 'sidechaining', most producers will immediately think of the tired 'ducking' effect that's been a staple of house production since before Daft Punk bought their first Alesis 3630. If you're fed up with that stereotypical effect, though, read on…

It's easy to make an interesting gated synth or pad by using a percussive part of your track to trigger a sidechain-enabled gate plugin. With most synths' in-built gate offerings sounding rigid, use a swung hi-hat or snare loop as a trigger to fit the gate effect with your track's groove.

2. Use ducking without a compressor

Ducking sounds using a kick drum through a sidechain-enabled compressor is easy, but a different way of achieving the same result is to draw the ducking in manually using volume automation. This might take a bit longer but it brings several advantages, including having much greater control. With many sidechain compressors not having a lookahead function, the ducking will be delayed by 1 or 2 milliseconds as the compressor reacts to the input signal. Adding the ducking using automation means it can be snapped precisely to the grid with a finer level of control over the gain reduction amount and release.

3. Make space in a rock mix

Rock musicians often record rhythm guitar parts several times before panning them out to fill the stereo field, creating a wall of rhythm guitar. This gives a full guitar sound but can make fitting a guitar solo in tricky. Subtly triggering a sidechain compressor placed on the centrally panned rhythm part with the guitar solo will 'invisibly' create extra room in the centre of the mix for the solo to stand out, giving a bigger overall sound while avoiding time-consuming automation passes and unwanted frequency clashes. Aim for around 2dB of gain reduction with a long release to avoid dynamic pumping during the solo.

To get vocal narration and background music to sit together, use the vocal track to trigger a sidechain compressor on the backing track. Using a medium attack and long release will keep the compression level consistent during the dialogue, avoiding unwanted pumping.

Envelope shaping lets you adjust the dynamics of a sound without having to mess with all the settings of a compressor, and a sidechain-enabled envelope shaper is ideal for enhancing a drum mix. One example is layering sampled breaks and hits for DnB or hip-hop drums. By routing the snare to the sidechain of an envelope shaper applied to a background break, you can dynamically remove attack or add sustain only when the snare plays, leaving the break otherwise unaffected and avoiding over-exaggerated drum transients, while saving time on manual editing.

A big part of the appeal of 90s rave music such as jungle was the crammed sound of the mixdowns, giving the impression that the bass was dominating the rest of the track. One way of achieving this sound is to route all the sounds you want to fall back into a single buss, then add a sidechain compressor triggered by the bass to reduce the volume of the buss. While you can mix hot into a stereo buss compressor or tape saturation plugin to achieve a similar effect, using a sidechain compressor gives more control over the finished sound, while being less destructive to the signal being processed.

Generally, a compressor will be triggered by the parts of an audio signal that carry the most energy - namely low frequencies. When compressing a whole mix or a group buss, this can lead to an overly dull sound as the downwards compression sucks the life out of the mids and highs, giving a bass heavy but overloaded sound. However, you can gain control of this by placing an EQ in the compressor's control path, changing how it reacts to the incoming signal.

Many plugin compressors now feature this functionality as standard, allowing you to filter the control signal and get more gain reduction on a whole mix without bringing too much focus onto the bass, or hone in on a certain frequency area. Some hardware compressors also allow you to connect an EQ using insert leads to do the same job, and - as it's the control signal being EQ'd rather than the actual audio signal - any EQ will do.