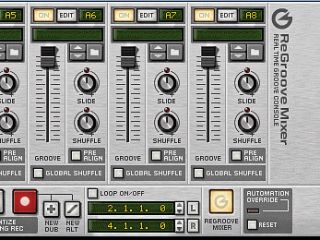 The essence of groove may be hard to identify, but one thing's for sure: you know when your music doesn't have it.

Even though most contemporary DAWs offer plenty of features for adding groove and swing to your tunes (including the ability to extract grooves from existing songs) aspiring producers are often heard complaining that their tracks sound too rigid. So, here are ten things you can try to loosen them up a bit.

Try playing your parts - including drums - manually. If you've programmed them already, go back and try to play them in real time. You'll naturally add your own swing, which you can subsequently tidy up, and ultimately, your grooves and tracks will sound better for it.

If your quantise engine enables you to add an element of randomness, give it a try, as it can often make things sound much more natural. Be aware that you might need to adjust some of the critical notes, or exclude them from the quantisation, though.

3. Get out of the groove

Don't just use the same groove map over and over. It can be easy to fall into this trap, but nothing generates creative stagnation faster than using the same trick in the same way time and time again. Always try out new maps every few projects - if they sound rubbish, you don't have to use them!

4. Make your own maps

Build your own library of groove maps, taken from your favourite tracks, both new and old. And then try using them on some unexpected types of music.

Don't just rely on rigid groove quantisation maps or grooves that you've extracted. Try shifting notes manually occasionally, especially once you've spent a bit of time getting to know what such changes do to the sound. You can then make a whole new map out of your edited groove and save it into your library.

It's often said that pre-delay adds a sense of urgency while delay makes things a bit lazier, and taken in isolation, this is normally true. But it's worth noting that sometimes delaying one element might make another sound like it's pushed forward - increasing the perceived pace - so always try both directions.

The length and strength of notes is almost as important to a groove as their actual placement. This is as true of drums as anything else, so with electronic music, use sharp note length changes. And with real drums, try tightening decay times or muting or damping them with pillows and other softening pads.

Read the section of your DAW manual that relates to quantise and groove exhaustively, as each one has its own features, which can be useful, fun or just plain confusing. But everything will be specific to that sequencer, so it can be easily overlooked.

With all our talk of groove quantise, it's important to remember that swing is only swing when measured against strict quantisation - so sometimes it's worth having an element in your track without swing. In particular, electronic music often benefits from having at least one fast, straight element - say a closed hi-hat on 16th-notes.

When emulating music that's been played live using programmed electronic techniques, it's important to mimic the playing style of real instrumentalists. So listen closely to your chosen style and analyse it meticulously. Does the bass player play 'in front of' or 'behind' the drummer, for example? These are the touches that will add authenticity to your music.

How to make a Beyonce Single Ladies-style beat