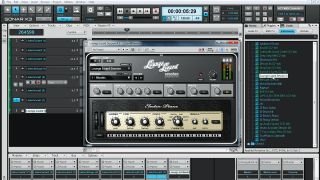 From its inception, Cakewalk's Sonar has been loaded to the brim with powerful features and covet-worthy plugins from an in-house development crew and a dream-team of third-party developers.

Some have come and gone, while some have stuck it out for the duration, pumping out the sort of excellent bundled tools that helped elevate Sonar from its position as a Yankee novelty to a world-class contender. Indeed, so many years later, Applied Acoustics Systems are still enjoying a fruitful partnership with Cakewalk, much to the delight of Sonar users everywhere.

But there's still room for more, especially with some old friends parting ways, and Celemony, with their brilliant Melodyne, have stepped in to fill the void left by Roland's now-departed V-Vocal pitch-correction tool. In fact, Melodyne is integrated into Sonar X3 with an elegance that makes the Melodyne Bridge used by most other DAWs seem like a square peg in a round hole.

Celemony and AAS aren't the only developers to throw in with Cake this time around. Nomad Factory once again join the fray, as do Tone2.

Needless to say, not all of the work has been left to hired guns. Cakewalk have added some brilliant features of their own, such as the new Comp Tool, a beautiful EQ and a nifty tape emulator to name a few.

The sheer volume of added extras can be quite overwhelming at first glance. Worry not, however, here we'll hit you with a barrage of telling tips that expose some of the little niceties found in Sonar X3.

For loads more tutorials on working with the new features of Sonar X3, check out the April issue of Computer Music (CM 202).

Sonar's GUI has always been, to put it delicately, "subdued". This has become even more apparent as new bits are added to the screen, making navigation at a glance a bit tricky. Sonar X3, however, allows you to customise your track's colour, making identification easier in crowded projects. Tracks assigned to a specific buss will automatically be updated to match its assigned colour.

One of the niftiest additions to Sonar X3 comes in the form of background scanning of your VST plugins. In the past, Sonar scanned for new plugins during startup, making for longer delays before you could get down to business. Now, Sonar X3 will boot right up, leaving the VST scanning process to run merrily in the background after the program is opened. You can, of course, disable the automatic scan process if you so desire.

Sonar's support for Audio Random Access technology allows seamless integration of the bundled Melodyne Essential into Sonar Studio and Producer editions. However, what may not be obvious is that even the bottom-tier Sonar X3 supports ARA and, in fact, existing Melodyne users will find their versions perfectly integrated, too!

Many of us are still happily rocking our VST 2 plugins, even as Steinberg make a concerted push into the third generation of the format. Always on the bleeding edge, Cakewalk have included support for VST 3 plugins, which show up in their own directory in your browser. It's worth noting that any projects using VST 2 will be automatically updated with all settings in place if you update a plugin to its VST 3 version.

Like many competing companies, Cakewalk sells different versions of their DAW, with the Producer edition being at the top o' the pile. While there are plenty of differences between the X3, X3 Studio and X3 Producer editions, there are no longer any arbitrary limitations on track count. Indeed, all three product packages are capable of an unlimited number of both MIDI and audio tracks. Additionally, all three offer unlimited effects and sends and full 64-bit support.

Video may have killed the radio star, but thanks to YouTube, more musicians are getting their music heard (and faces seen) than ever before. Sonar's developers are not oblivious to this, and have included a means publish your videos (and audio) directly to YouTube with a single click in Sonar's control bar. Remember, though, that YouTube videos can be set to Private or Unlisted too, making for a quick 'n' easy way to preview tracks and mixes between collaborators.

Sonar X3 Studio and Producer edition owners will get an earful of analogue warmth with the included Blue Tubes Studio Mixing Suite from Nomad Factory. Consisting of no less than 19 (!) plugins, there's a processor for nearly every contingency. This largesse also provides a perfect opportunity to build, say, the perfect vintage effects chain and save the lot as a customized FX Chain with its own GUI and share it with other users.

A helping of herpetology

Looking for a vintage psyche vibe? Applied Acoustics Systems' Lounge Lizard Session Sonar Edition gives Sonar Studio users the most famous electric pianos ever made and some lovely effects to sweeten the pot. The built-in effects can be coaxed into producing everything from dense reverberant chimes to the famous sonar "ping" from a certain Floydian classic. Though it lacks the programmability of the full-blown Lizard, there's still plenty of power if you're prepared to dig in, so have at it.

Always edgy, often aggressive, Tone2 instruments and effects always stand out in a mix. X3 Producer owners will find Tone2's bombastic BiFilter in their effects rack. This fantabulous filter runs the gamut from vintage voltage to frenetic FM with some down 'n' dirty distortion dialed in for extra oomph. Beyond the obvious applications, why not try wrapping it around a vocal track for some seriously warped warblings?

Gobbler gives musicians a means by which to share and store their files and projects offsite using cloud storage, and it's now integrated right into Sonar's control bar. With 5GB of storage provided for free, you can use this technology to tap into the talents of musicians you've never met in the flesh. Looking for a guitar solo? Why not look to the Cakewalk forums for collaborators?