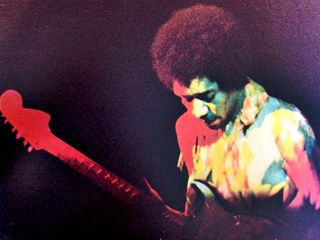 Jimi with Stratocaster: an iconic combination

Jimi Hendrix was almost certainly the coolest man ever to walk the earth. Unfortunately, cool is something that's not available in any shops. However, if you want to try to emulate the man's extraordinary guitar sounds, we can point you in the direction of plenty of products that will get you in the right ballpark.

In his all-too-brief career, Jimi was known to use a variety of guitars and amps, but there's one combination that stands out as the iconic Hendrix rig. Take one 1968 Fender Stratocaster, plug in to a 100-watt Marshall Super Lead stack, sprinkle liberally with Fuzz Face, wah-wah, Uni-Vibe and Octavia. Then turn up very loud indeed.

Of course, few of us play the kind of festival stages required to get the most out of a set-up like this on a regular basis. Happily there are some modern all-in-one solutions for Jimi devotees that don't require either industrial-strength earplugs or incredibly tolerant neighbours.

Now available for considerably less than its £199 RRP, the DigiTech Jimi Hendrix Experience pedal models sounds from seven classic Hendrix tracks and was designed in conjunction with Electric Ladyland engineer Eddie Kramer. So all you need is a guitar, an amplifier, and this pedal and you are ready for Woodstock.

Kramer explains: "We spent two years working on this thing. We worked very hard to keep the sounds as accurate as possible. Basically, I got the original tapes and we just took 10 or 12-second samples of the key songs - the rhythm sound and the lead sound. Then DigiTech mapped those samples and put them on the DSP chips."

If computer recording is your thing, the Jimi Hendrix Edition of the popular AmpliTube modelling plug-in is just the ticket. Giving you access to a virtual library of Jimi's amplifiers, cabinets and effects, it's also possible to go way beyond the presets and create exciting new sounds of your own.

One for the more tech-savvy amongst you, it's the only way to recreate the guitar sound from The Star Spangled Banner with just a Strat and a laptop.

If volume and money really are no object, other than tracking down a bona fide late 1960s Plexi, Marshall's handwired reissue is the most authentic choice for experiencing Hendrix tones at high volume. Beware though, without some form of power attenuator such as a THD Hot Plate, we are talking very high volume levels indeed.

Playing through a cranked 100-watt Plexi is something that every guitarist should experience at least once; the volume becomes a physical sensation and the dynamic response is astonishing.

When Jimi was going boldly where no guitarist had gone before in the late 1960s, stompboxes were in their infancy. These days, the likes of Roger Mayer and Jim Dunlop produce whole ranges of analogue effects that will get you pretty damn close to Jimi's sounds.

As far as Uni-Vibe-inspired pedals go, you'd be hard pushed to find anything to trump the excellent valve-driven Effectrode unit. It's not cheap, but as our review says, "what price would you pay for ultimate tone?"

You've probably worked out by now that to get that full-on Jimi sound, you are going to need a Fender Stratocaster. Preferably a 1968 model strung left-handed and played upside down, but assuming that you can't/won't shell out tens of thousands on a vintage model you have several options.

If you are all-out for authenticity, then the Fender Custom Shop is the place to go. A '68 Heavy Relic Stratocaster is pricey, but a very good guitar indeed. Unlike in the late 1960s, if you can't afford such extravagance, these days Fender produce Stratocasters at every price point.

The latest iteration of the most popular electric guitar in history blends modern reliability with plenty of old fashioned vibe: "It does feel and sound quite a bit more vintage-like, loose and played in than many a modern Strat we've auditioned."

Ok so it doesn't have the larger late sixties headstock, but in terms of sheer performance for the price, Fender's Classic Player guitars are hard to beat. The combination of Custom Shop know-how and Mexican manufacture is a real winner and the Custom '69 pickups are right in Jimi territory.

That's the gear covered then. Now there's just the small matter of becoming a stone cold genius who reinvents the instrument and inspires a legion of immitators. We're not sure that we can give you advice on that score...