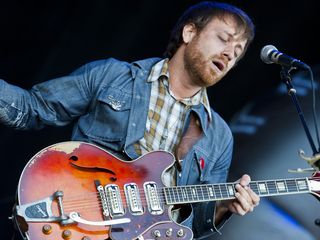 Total Guitar issue 231 hits the streets today, with the cover star none other than singer, guitarist, record producer and Black Keys mainman Dan Auerbach. In the run-up to the band's slot at the Reading and Leeds festivals, Auerbach talks vintage gear, going beyond the blues and much more.

In conversation, the star revealed that breaking rules in the studio and keeping things dirty is all part of The Black Keys's signature sound. When recording guitars in the studio during the El Camino sessions, Dan used small amplifiers.

"Everything from a little five-watt Tweed amp to my Ampeg Gemini II," he confirms. "I know I used that a bunch because I blew up the speaker. I also used the Magnatone M10 a bunch. We recorded all the rhythm guitar tracks live in the room with the drums.

"I wanted to get this kind of shitty bleed into the drum mics, so I kept it to small amps - I like small amps anyway. I would never use a big Marshall stack to record. On every track of El Camino there's the sound from the guitar amps bleeding into the drum mics, which kind of gives it a little bit of raw flavour."

Find out more about what's in Total Guitar issue 231, and how to buy a print or digital copy.