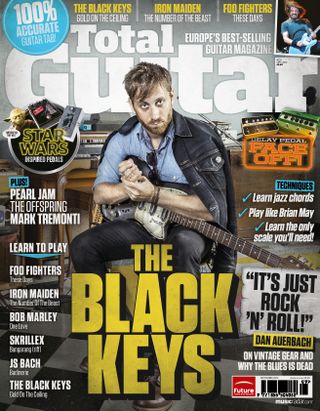 Total Guitar 231 is on sale nationwide (and, digitally, around the world) from 6th August. In the run-up to their slot at the Reading and Leeds festivals, we speak to The Black Keys' mainman, Dan Auerbach about vintage gear, and going beyond the blues. Plus, we've tabbed 'Gold On The Ceiling' in full!

The Black Keys
Dan Auerbach talks El Camino, vintage
gear and why retro's not his thing

Stone Gossard
Pearl Jam and beyond: the guitarist
talks us through his Seattle CV

In The Studio: Bullet For My Valentine
Matt Tuck tells us what to expect from Bullet's new album