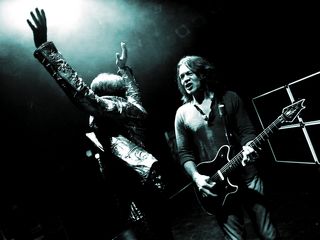 EVH and Diamond Dave in rehearsals for their 2012 world tour

Eddie tunes his guitar down a semitone (Eb Ab Db Gb Bb Eb) on this track from Van Halen's 2012 album A Different Kind Of Truth, which sees the long-awaited return of singer David Lee Roth to the band.

This tuning adds weight to the riff when combined with the wah-wah pedal. The track begins with a syncopated Eb octave riff before Eddie wades in with this heavy, groove-laden riff.

While playing the riff, you should focus on keeping the groove and feel during the melodic fills at the end of each phrase. It's easy to play these fills straight, but Eddie manages to get personality and expression into every note. This is often due to the speed of his bends and the timing of his vibrato.

Eddie also presses his toe down on the wah pedal to add emphasis to the notes that he wants to jump out of the mix.

Use a guitar with a bridge position humbucker for the fat distorted tone of the single-note riffs. Use a pick that doesn't bend when you attack the strings, from gauge 0.7mm upwards, for example.

Add shape to each phrase by pressing your toe down on the wah-wah pedal at the start of each line, slowly returning the pedal to the heel position in the middle of each phrase, and then using the toe down position on more expressive notes.