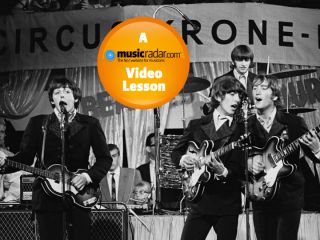 Released as a double A-side with We Can Work It Out on 3 December 1965, Day Tripper is a classic slice of Lennon rock 'n' roll, with one of the most famous riffs in The Beatles' canon.

There's some doubt as to what guitars it was recorded with as so many instruments were present during the Rubber Soul sessions, but to get close, set up a slightly edgy clean sound and use the bridge pickup of a semi-acoustic like a Gibson ES-345 or Epiphone Casino.

Here, we've used an Eastwood Airline RS-II guitar through a Vox DA10 combo set up to roughly approximate an AC30. The riff is moved through three positions throughout the track, but here it is in E, as per the intro.