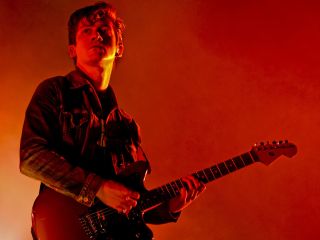 Make sure the A note on the third string isn't played too loudly. It should ring subtly in the background. Generally, this note sounds as you play the E note on the fourth string and on the descending notes. However, Alex Turner doesn't play it consistently throughout the song, so don't get too bogged down trying to copy it exactly.

Go for a clean tone with plenty of treble and be quite generous with the reverb. Use a guitar with a single-coil pickup in the bridge position. If you're using a guitar with a humbucker, you can try rolling off the bass to its lowest setting to get close to a singlecoil tone and to stop the sound from getting too woolly.

For more guitar lessons where that came from and a whole lot more besides, check out Total Guitar magazine on Apple Newsstand. US readers click here.