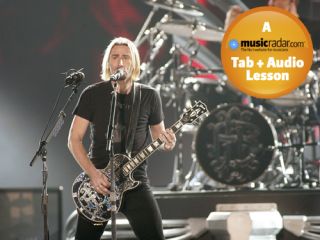 In this video lesson, we show you how to master Nickelback's rock guitar style. The 'in-the-style-of' track we've written here is straightforward to play but harmonically complicated.

You should aim for a big, tight sound from the rhythm guitars and concentrate on timing, as there's a lot of space in the guitar parts and any timing issues will be very apparent. The chords in the first part of the track are mainly power chords with two or three notes in them and you should aim to get quite an aggressive picking hand attack when playing them.

The lead part is reasonably easy to play and will give you some ideas for moving around the fretboard and building a pentatonic-based solo. The final phrase is a fairly speedy lick, but if you barre your first finger across the second and first strings, it'll be easy to use hammer-ons and pull-offs to play it.

You can hear the unmistakably modern rock sound of PRS guitars through Mesa Boogie amps on Nickelback albums, with plenty of bottom end and lots of layers of guitars being tracked in the studio. If you're playing this kind of music live, you won't have the luxury of laying down ten rhythm parts, so you may want to add a bit of chorus to your sound to help thicken it out.

There's also quite a lot of gain used in this type of music, but don't use too much or you may end up with a fizzy mess. The dynamics of the attack from your hands with the sound of the power section of a valve amp being driven hard will set you on the right path. We used a Paul Stevens Singlecut Custom through a Blackstar A15 combo with a Wampler Brent Mason overdrive pedal.

Next page: tab for the examples

[Bars 1-8] Make sure you get an aggressive attack, but don't let any unwanted strings ring open by mistake - muting is a good idea here!

[Bar 9 onwards] Timing is the key word here, so be careful not to rush the chords in this section.

Next page: tab for the solo

[Bars 17 and 18: solo] This is an octave part using the fifth and third strings, so make sure you have the fourth string muted throughout by the underside of your fretting hand's first finger.