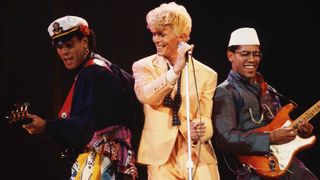 David Bowie was a musical innovator and cultural icon with a career spanning five decades. His first major hit, Space Oddity, charted in 1969 and coincided with the first moon landing.

Over the years, Bowie has collaborated with many great musicians, and he particularly had a nose for sniffing out six-string talent. These 10 guitarists have all played a part in creating Bowie's highly inventive, signature sounds.

First up is, of course, the man himself. David is a solid rhythm guitar player and he performed the 12-string acoustic guitar parts on hit songs like Star Man, The Man Who Sold The World and Space Oddity. These parts often combined simple, open chord shapes with a great sense of timing and groove, and in many songs form the initial 'hook' for the track, drawing the listener in.

Our second axeman is the gifted Mick Ronson, who played lead on many early Bowie records including Ziggy Stardust. Ronson had a great Gibson Les Paul-style rock tone and also a flamboyant dress style, which fitted Bowie's glam-rock aesthetic perfectly.

Next on our list comes Mick Wayne, who was drafted in to play lead on Bowie's breakthrough hit Space Oddity. Wayne's pentatonic licks in the bridge section of Space Oddity add some perfect 'far out' flavour.

Number four is Adrian Belew, who joined Bowie for his Heroes tour and recorded the live double album entitled Stage. Belew is also well-known for his work with top progsters King Crimson and he often played a Parker Fly guitar for his live Bowie sessions.

The 5th player to make the top 10 is Robert Fripp, who was asked by producer Brian Eno to play guitar on the album Heroes. Fripp added experimental lead tones to famous songs like Heroes. He is also the original founding guitarist of King Crimson.

Carlos Alomar's guitar work was featured on Young Americans. In this period, Bowie's music was becoming more funk influenced, and Alomar helped to create some great grooves on the songs from this period.

Earl Slick played on the Diamond Dogs tour and then on Station To Station. He took over from Mick Ronson in the mid 70s and his powerful style was showcased in songs like Rebel Rebel - although Bowie himself played electric guitar on the recording.

As already mentioned, blues supremo SRV played lead on the Let's Dance album and was also invited to go on tour. Stevie declined so he could focus on his solo album Texas Flood, and the rest is history. SRV's signature Albert King-style licks feature in the outro sections of songs like Let's Dance and China Girl.

Finally, Reeves Gabrels was an essential part of Bowie's 90s line-up and member of his alternative side project, Tin Machine. Gabrels has a great neck pickup-orientated lead tone not dissimilar to SRV and was another Bowie guitarist that liked the Parker Fly.

We're put together an assortment of 10 riffs and licks in the style of our featured players. Each four-bar idea is repeated twice and the backing track has all the transcribed guitar parts removed so you can play along.

Early on, Bowie often strummed an acoustic 12-string. The chords in Ex1 allow the open second and first strings to ring out continually. These ringing top strings add continuity to the chord changes and create a 'spacey', far out sound.

This style of strumming will sound best if you 'dig in' and play with feeling and authority. David would also leave the sixth string open on Fmaj7 chords, which lent a darker sound to the chord.

This second riff utilises open position powerchords and is fairly easy to play. Check out the picking directions for the single note line at the end of bar 2.

Ronson used a Gibson Les Paul Custom through a Marshall amp, and his sound was big and aggressive but very musically satisfying.

The licks in Ex3 will sound most authentic if you dig in with the pick. Check out the picking directions, as the arpeggio in bar 3 will sound best if picked as suggested.

You can hear some great Wayne licks buried somewhat in the final sections of Space Oddity.

The melody here uses a heavy overdrive for sustain and combines it with delay to add space. You can also experiment with modulation effects like chorus to add to the 80s vibe.

Belew would often play notes that sounded at odds with the chords - but Bowie loved this experimental approach.

The idea in Ex5 follows on from example 4 and uses the same sound. Be sure to include the finger slides as these add to the overall presentation.

Hold the string bend in bar 4 and let this ring against the A on the 5th fret. Another great experimental guitarist and a fave of David's.

Bowie employed Carlos during his earlier funky phase. This example requires accuracy of strumming and picking.

Adding some 70s-style phaser to the single-note 'popping' line will prove very effective. Make the notes of the popping line very staccato (clipped).

Nile Rodgers is one of the greatest funk guitarists of all time and his work is all over the Let's Dance album - which he also produced.

This example uses a simple but effective chord shape combined with 16th-note strumming. Use a single-coil neck pickup for that funky Nile Rodgers tone.

Earl Slick replaced Ronson, was ousted from the band and then hired again to replace the departed Stevie Ray Vaughan.

Stevie brought bluesy freshness to China Girl and Let's Dance. Use the third finger of the picking hand to pluck the high notes on the first string.

This final lick combines aggressive attack with blues phrasing - note the similarity to the phrase employed in the previous Stevie Ray Vaughan example.