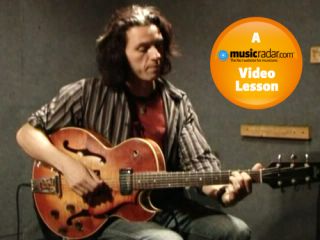 Chord tones: Jimi Hendrix used them, and so did James Hetfield on Nothing Else Matters. Now it's your turn to try them out in your playing.

In this video lesson, Testament guitarist Alex Skolnick explains how learning triads in all positions up the neck can be a quick 'in point' to playing with chord tones.

You can use the notes from chords to make melodies. These chord melodies sound great for solo guitar because as you play the tune the chords provide a backing. A good way to start making up chord melody ideas is to learn triads. Triads are three note chords that consist of a root, a 3rd and a 5th. In a C major chord those notes are C, E and G.

You can play these notes in loads of different positions, which all give different melodic possibilities. Once you've got the hang of the chords, check out Alex's improvised chord melody (tabbed on page two). Alex mixes up some slightly more complex triads with a tasteful melody.

For more on Alex, visit the official Alex Skolnick website.

Example 2: C major triads up and down the neck

This time Alex moves the inversions of a C chord along the length of the string. Again the notes are always C, E and G, just in a different order each time.

Example 3: triads on other strings

You can play triads on any three strings. If you've mastered these first three examples, then try to work out C triads on the highest strings as well.

Alex plays this solo quite freely so don't worry too much about the rhythm of the notes. Instead listen to how each chord forms part of the melody.