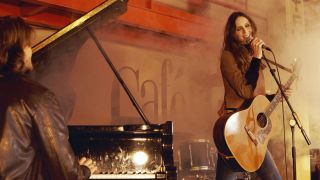 Open-mic nights are the proving ground for many emerging acoustic performers, offering a brilliant way of dipping your toe into live performance, meeting other artists and honing your craft.

Meet & Jam is an online community for musicians who want to start bands, find musicians for recordings, or offer their services to other players, but they also organise regular Meet & Jam nights across the country. Here, director Nick Ford-Young talks us through his top tips for open mic success.

1. Only bring the gear you need

A busy jam night means lots of people with lots of gear. Try to keep it to a minimum, and everything will run more smoothly.

"People are pretty good at bringing the right kit; it's often the people who bring too much that are the problem! The smaller and simpler the setup, the better. The best musicians come with a guitar, a capo and tuner and the songs speak for themselves. An acoustic guitar plus an industrial pedalboard equals the wrong vibe (usually!)."

2. Tune up before you turn up

"Tuning is often a problem when people try to do it on stage just before playing. Off stage is the best place to tune, and then you can take your time without 100 pairs of eyes on you. "

"We try and have musicians share as much of the gear as possible, so the sound stays consistent throughout the night."

The best musicians come with a guitar, a capo and tuner and the songs speak for themselves

If you're going to perform covers, think about putting your own spin on them.

"We build the setlist and go back and forth with the musicians before the Meet & Jam Nights. But I imagine some open-mic nights wish Wonderwall had never been written.

"Great songs are great songs for a reason, though, so any version done well, or very well, is normally awesome to listen to in my book!"

It's natural to be nervous before performing to a room of people you don't know, but don't let it get in the way. It could even become part of your charm!

"I haven't seen too much nervousness, actually, and if it's there, people normally shake it pretty quickly once they start to perform. The best cure in the world! One girl in Bristol looked so nervous I thought she wasn't going to start singing, but her shy demeanour and mesmerising voice made it the best thing I've seen this year."

Don't wait until you're due onstage before you tune-up

"Organisation is essential. At Meet & Jam Nights, we have over 50 musicians playing at each night and three originals bands play for Island Records A&R in the middle of the event.

"We carefully construct the set before each night and make sure everyone knows the running order. Changeovers are what I always agonise over, but as long as there's some music to play through the sound system in between, it keeps the flow of the event going and the crowd are happy chatting."

Thinking of leaving straight after you've played? You could be missing out on picking up some valuable lessons.

"That is what these nights are all about. It's the chance to watch, learn, support and meet people. There is so much to be learnt from other performers - always, no matter what level you are at. The more the musicians support each other, the better the night, without fail."