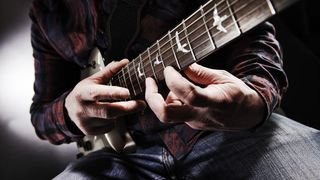 You're most likely used to playing hammer-ons and pull-offs with your fretting hand, but notes can easily be added with the first or second fingers of your picking hand (known as a 'tap').

Once you get past the hurdle of co-ordinating both hands, tapping is a reasonably easy way to play fast, slick-sounding licks. Eddie Van Halen changed the face of rock guitar in the 80s with his solos on songs such as Eruption and Hot For Teacher, and players such as Bumblefoot continue to push the technique - as heard on his track Guitars Suck.

Start by tapping the 12th fret with the first or second finger of your picking hand, then perform three pull-offs with your fret hand.

Next, use your fourth finger to hammer on to the 8th fret on the second string, then repeat the process again on the second and third strings. Aim for clean, steady playing at a manageable tempo.

The secret to good tapping is fret-hand string muting. Keeping the idle strings quiet is essential to a clean, controlled technique. Get it right and tapped licks sound awesome.

Repeat the first four notes and listen carefully to the sound of both taps and pull-offs. All the notes should be the same volume and intensity throughout.

This is the 'Van Halen' string change, which is led with a fret-hand tap (shown as a squared note). This is sometimes called a 'hammer-on from nowhere'.

The challenge here is muting idle strings. Keep the treble strings muted with the underside and tips of your fretting fingers and the bass strings with your tapping hand.

These three licks will give you some different perspectives on applying pentatonic runs to fast lead playing. The blues example features an upward sliding sound, which covers five pentatonic scale shapes, whereas the rock example takes a string skipping approach.

Finally, the shred example stays in one fretboard position, but uses a fast descending flurry of notes for an ear-catching cascading effects.

Use the first and third fingers of your fretting hand to hammer on and pull off at the 13th and 15th frets. In between the fretting-hand notes, use your picking hand to tap the 16th fret, then the 15th fret for a cool bluesy sound. We've used the A blues scale (A C D Eb E G) for this lick.

For this lick, you'll be playing shape one of the A minor pentatonic scale with your fret hand, which is a bit like a two-note-per-string pull-off lick.

Instead of picking the first note, use your picking hand to tap the 17th fret an octave above your first finger.

This lick has a similar format to the rock lick: play two notes with your fretting hand and one tapped note with your picking hand.

This time, however, the two fretting-hand notes are played as a hammer-on and there is the extra challenge of skipping over the second string.