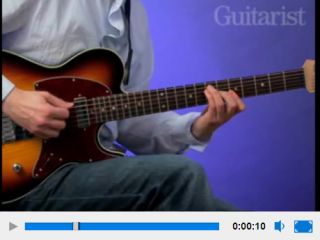 The tips here are demonstrated on video by Stuart Ryan, head of guitar at Bristol Institute of Modern Music

Improving on the guitar, for many guitarists, is the reason for playing the instrument in the first place. The warm, self-satisfied glow inside when you finally see the benefit of all those hours of practising can't be beaten - but all too often those hours are meanderings in the dark: aimless and not actually all that enjoyable.

But it really shouldn't be that way. So this lesson (complete with video and tab) is designed to put some life back into your learning.

To bring you this lesson, MusicRadar's sister magazine Guitarist asked some of the top guitar tutors in the business for their wit, wisdom and home truths about what it takes to really improve your playing. You'll find 10 of those tips below, and a mammoth 40 more in Guitarist issue 309 - on sale now.

1. Golden Rule: practice with a metronome

Great players have great timing, so practise with a metronome - every single time you practice. (Mike Goodman)

Most guitarists don't know the notes on the fingerboard - which means there's no point venturing into the world of musical theory as you won't be able to apply it. Here's an exercise that'll get you knowing the intervals between notes in no time… The exercise cycles through the four triads in one area of the neck: witness the intervals as they change and then use the roots, 3rds and 5ths as a reference from which to work out where the other intervals are. (Mike Goodman)

Work on integrating technical exercises with a musical application. Too many guitarists know loads on exercises that they never expand upon when they actually play. The closer your exercises are to real music, the more likely they are to come out when required. (John Wheatcroft)

If you don't know where to start with improvising, try this. You can only use two notes - the A note on the fourth string 7th fret and the G, on the fourth string, 5th fret. At first you'll probably feel a bit stupid or run out of ideas in a few seconds, so think of each note like a separate conga drum and imagine all the possible rhythms you can play between them. Put your guitar down and tap a rhythm on the table. Once you find something you like, pick the guitar up again and imitate this rhythm using just our two notes again. Gradually add a few extra notes. Probably five minutes or so in, you'll begin to create a marvellous thing called… music! (John Wheatcroft)

…and then listen some more! I learnt to play jazz professionally in just under a year. Granted, I'd been playing rock for 10 years or more, so my technical facility was in place. The real key to getting inside the music was to really, really listen. In this year I transcribed a single phrase each day from a jazz album. This allowed me to recognise each phrase, and similar, when re-used - no matter how complex their playing may at first seem, every musician uses devices. (John Wheatcroft)

6. Think up and down

Playing chords with triplet rhythms can throw up two performance options - do you use strict alternate picking or a down-up-down, down-up-down picking? Both are valid, but while the former is best at medium-to-high tempos, the latter can often produce better accents. Try the following exercise with both approaches and see which you prefer.

(Click image to enlarge.) E9 chord in triplets with both picking patterns shown. The second bar requires an assured sense of rhythm as it's more syncopated so use the bracketed pick strokes ('ghost' strokes) to keep your playing solid. (Jason Sidwell)

Why do so many players try to run before they can walk? Listen to a great 'slow' player like Mountain's Leslie West, Andy Powell of Wishbone Ash or Peter Green. Hear how every note is a thing of beauty and has its own point to make, then contrast that with someone trying to shoehorn 50 poorly executed notes into a train-wreck of a lick. In summary, to paraphrase Gary Moore: "How can you hope to play lots of great 'fast' notes when you can't make a few 'slow' ones sound good?" (Neville Marten)

Thin picks are great for Townshend-style strumming since they give nicely under pressure from each up or downstroke. They sound sweet too. But try to gain accuracy in fast single-string alternate picking with one and you don't have a cat in hell's chance: the pick bends each time you strike a string and often hasn't returned to centre by the time you hit the next note - so how can you possibly be in control? Go for standard 'heavy' picks at the very lightest and you can bet your playing will improve fast! (Neville Marten)

9. Play on one string

Playing on a single string is a great way of escaping from the same old pentatonic box licks. Select a string and then map a scale out on it, then limit yourself to using just that string while you improvise. The benefits are that you'll be able to bend notes that don't usually fall easily under your fingers in certain fretboard positions, and you'll be able to use slides to glide around the fretboard. Here's an example to get you started. (James Uings)

Work on expression and dynamics constantly. Imagine a 'dynamics scale' that goes from one to ten. Most players generally play everything at around four to six. Take one of your regular phrases and play it as a one, ultra soft. Then go all the way up to a ten. You'll be surprised how little of this most of us actually use. All the best players, however, use the extremes of dynamics all the time. (John Wheatcroft)