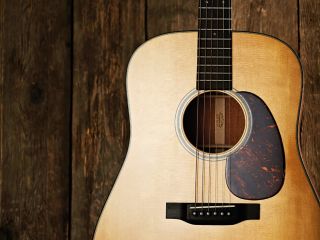 There are many variables when it comes to recording acoustic guitars, and wood is just the tip of the proverbial iceberg

Whether you are a seasoned pro or an absolute beginner when it comes to recording acoustic guitars, here are 10 snippets of advice that will help you get a better recorded sound.

Whether you choose from your extensive collection, or you borrow a guitar from a mate, it's worth trying at least a couple of different guitars when recording: they can sound radically different.

This is obvious. If you know what you're playing and you're playing it confidently, it will sound better by default. If you don't, it won't and all the tonal 'trouble' you're having will snowball.

3. Be aware of reflections

What's beneath you, to your sides and above you when recording? For example, you'll notice that recording on a hard floor sounds very different than when you're on a thick carpet, because of the reflected sound (or not) coming back to the mic. Experiment, listen, learn - you don't have to kill the reflections, but you do have to be aware of what they're doing.

Jez Williams, Doves: "Sometimes, in the studio, I like the [acoustic] guitars to sound quite trashy, like an early Bowie sort of sound, and you can get that by using dictaphone microphones, and blending it with an expensive mic signal. It puts a load of middle crunch on it."

If you're layering a strummed rhythm part, try using a thin plectrum. Different thickness picks can have a remarkable effect on tone, so before you stampede for the EQ knobs or buy that expensive mic, first try shelling out 79p on a thin pick.

A step on from basic mic techniques, take two cardioid mics close together, around 90-degrees to one another, around a foot from the guitar. Point one towards the neck/ body join, the other towards the soundhole: a classic Nashville recording technique. Rode makes a single mic for the job, the NT4.

If you find you're needing to EQ things radically, you probably have a fundamental issue with mic choice and placement. Get that right in the first place and you'll save yourself a great deal of work. But...

You might like your acoustic all fat and bassy. It can be good when solo, but it's a problem in a band mix because the acoustic may clash with the bass. Try rolling off frequencies below 100Hz, creeping up to around 350Hz to taste. Notice how mixing just got easier?

If you've ever tried to mic up a guitar with brand-new strings, you'll know all about finger noises: we call them seagulls. To avoid them, get a good few hours on the strings before recording. Coated strings (such as Elixir Poly- or Nanoweb) can reduce squawks too.

Dan Auerbach: "I just put the mic in front of me, it really doesn't matter. I mean, some of my favourite acoustic sounds are field recordings - a really cheap mic picking up the vocal and the acoustic. I don't like perfection; it really bores the shit out of me."

The Summer 2012 issue of Guitarist magazine, on sale now, contains a huge 27-page feature packed with advice, information and techniques all geared towards making you a better - and better sounding - acoustic guitar player.