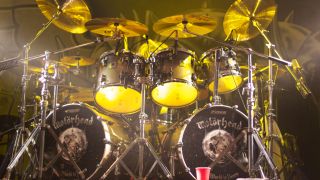 Mikkey Dee: he is somewhere there (Image credit: Brian Patterson/Corbis)

Mikkey Dee has been Motörhead's drummer since 1992, and his solo spots have become a much-anticipated pillar of the band's powerful live shows. Here, he shares his top tips for soloing success.

"Think, 'Who am I playing this for?' You've got the girls in the crowd: they need to stamp their foot and feel the rhythm. You got the musicians: you need to show them a few tricks. But the average listener doesn't play drums, they just want a good show."

"Improvisation is only about five percent of my solos. The main structure has been the same for a few years but I do pop in little bits and pieces. I usually practise when we soundcheck. I'm the first one there, so I've usually got an hour before Lemmy and Phil come into the building. I warm up and come up with ideas."

"I don't think I'm that a good a soloist, but I am good at coming up with a drum solo that entertains you as well, without being boring - like kicking the bass drum and then clapping your hands, trying to get the crowd going. I hate that s**t. If you want to run for a quick beer, that's a good time to do it."

"It's not just about technique. I like a solo to move forward. I start in the middle of a song, solo, back into the song, finish. If you see a guy doing slow s**t, you're definitely running for a beer, including myself. For some music, that might work, but not Motörhead. But then, if you race through it like a f**king moron, it's not good either. A drum solo needs to keep moving upwards, not down the hill."

"The ideal time limit, I would say, is two minutes. Mine is four minutes, so I think it's a little long, but if I tried to cut it, I'd rush through the techniques and the transitions and lose the smoothness. Then I'd sound like a guy dropping a sack of rocks down some wooden stairs! If I have a really good night, I can even stretch that. Sometimes, I get stuck in one particular technique because it feels so good."