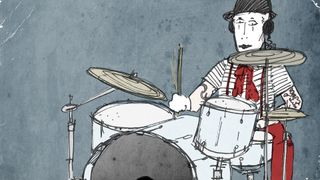 DRUM EXPO 2013: The live stage is an entirely different ball game to the studio, and television work is different again. Here, a collection of seasoned session players - made up of Carlos Hercules, Donavan Hepburn, Steve Barney, Mark Pusey and Ash Soan - offer up advice and insight into life on the road.

"Knowledge of your rig and set-up is vital - knowing what gigs you're getting and what's required. If it involves sampling, then triggers, electronics and sequencing are likely to be a required skill. They're appearing more and more in the gigs I do. It's easier to count the gigs I don't need electronics on than the ones I do." - Carlos Hercules

"I'll give you a piece of advice that was given to me years ago. The click is purely a guide. It's not a leader. You're the leader. It just lets you know the tempo of the tune and that's it.

"A lot of guys tend to focus on the click and their playing starts to become square. Once they've gotten to grips with it, there are ways of knowing it's there and forgetting it's there.

"When you're playing to click over long periods of time you're actually developing your internal clock. My advice is turn it down slightly, don't have it so dominant in your ears that your playing changes because of it and just practise.

"Another tip is play along to records that have programmed drums, because then it's to time, as opposed to playing along to another live player, who may not be playing to a click. I get asked about it quite a lot but I prefer playing to a click than without one. Without a doubt." - Donavan Hepburn

Glamour: will it be champagne and caviar all the way, or is it more likely to be Special Brew and Super Noodles?

"If you're lucky then, courtesy of the artist you've been employed by, you may find yourself in a five-star hotel overlooking the ocean, or sitting behind your kit at Madison Square Garden with a drum tech taking care of everything. You may also find yourself travelling up and down the motorway on the M1 sitting in the back of a cramped splitter bus, with the gear in the back and no tech. You have to be prepared for every situation." - Steve Barney

Looking good: how important is image to landing top gigs?

"It is a terribly important part of the industry nowadays. It's something that I really struggled with in the early days. If you get called for an audition or you're up for a gig, people know you can play, that's why you're there in the first place. The crunch may come down to how you look onstage beside a certain artist.

"If two guys are auditioning for a rock band, both play to the same standard but one has a ripped shirt, tattoos, a lip ring and a shaved head whilst the other has glasses, a suit and a side-parting, who'd get the gig?

"If you're like me and have trouble with keeping up to date with fashion, get friends who have style to go shopping with you, or look in magazines at what is 'in'. There have been plenty of gigs I haven't got because I don't look the right way.

"I've done tours and gigs with lots of bands where I've had to change my image, one example being lots of recent gigs with Hurts. The chaps in the band are extremely stylised. I did my homework, I went online, checked what their image entailed and styled myself accordingly to fit in for TV and tour work. You have to be a team player and this is another example of it." - Mark Pusey

"I think one has to be responsible with health on the road. You have a lot of time on your hands and you can choose how well you use it. I like to work out for my personal health. The better you feel, the more energy you have - and I try to practise rudiments for my musical health." - Carlos Hercules

Mindset: how is live different to in the studio?

"Sometimes in the studio there's less adrenaline than onstage. That can be tricky if the track requires you to be slightly vibed up and have the energy but you're in a very quiet studio. It's hard to muster that up. To do that I generally beat the living daylights out of the kit for a little bit to get my heart going and my blood pumping to get into it.

"Some of the subtle things you play live don't come across. Those lovely grace notes no one will know about, but in the studio every single tap, every thing you do is recorded and it matters. I love that. The nuances are the thing that I love. I love listening to recordings and hearing what people are doing: 'He's got a duster on that snare, he's using plastic tipped sticks,' etc." - Ash Soan

Miming: is it important to learn how to mime your parts for TV?

"I've done it quite a lot throughout my career. Just make it look like you're playing and learn the part. If it is a track with live drums, all the better.

"What I've done in the past with bands that I've MD'd is we've had the opportunity to go into a studio and record the band and then we mime to ourselves. I know what I've played on that particular song so I know how it sounds and what it looks like. Wherever possible I always encourage the guys to learn the song so at least you look like you're playing, rather than hitting the floor tom when it's clearly the snare. Of course the camera is not generally on you, it's on the person at the front." - Donavan Hepburn

"I was on tour in the US and I stayed behind after a gig in Washington to see some friends. I had a pretty late night, we'd been travelling a lot and the jet-lag started to kick in. At dawn next day, the label sent a car to take me to the airport. Washington has two... the car took me to the wrong one! The staff at check-in were super helpful, but one guy was relentlessly making fun.

"After 10 minutes or so of him mocking me while I waited for a taxi to take me to the right airport, I snapped and told him to 'go away' - although not so politely! I was overheard by security guards with guns who hauled me into the airport jail.

"The real police arrived and told me they'd have done the same thing and let me go! The dash across Washington to the other airport was a fraught one, but I got to LA on the next flight and made it onstage having missed the soundcheck with about a minute to the off. Phew!" - Mark Pusey

Monitoring: what do you like to have in your monitors?

"What I try to do is recreate the CD sound in my ears. Obviously I have myself in there and all the click track stuff, then the bass and a bit of keys, a bit of guitar and stick the vocals on top.

"I try to have a full mix and because we're using stereo in-ear monitors, I place the music in my ears the same way I see them, so if the bass player is to my left, I pan him over to the left then put the vocals dead centre with the click.

"That's just my personal way that I've felt the most comfortable over the years. Likewise with my drums, I hard-pan my first tom and go round so when I go round the drums they go round in my ears." - Donavan Hepburn