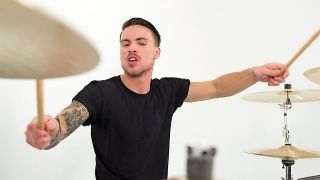 Dan Flint of You Me At Six

Dan Flint has emerged at the vanguard of a new wave of young, gifted British drummers, so when he gives you tips on how to progress, you should probably listen up...

"Always play to songs and use it as a click track. There's no point practising just to yourself. It's really easy to speed up or slow down so if you've always got something to reference you that's great."

"I wake up in the morning and sit there with a practice pad just doing rudiments. You'll get the muscle memory through that, even if it's just single stroke rolls or doubles or paradiddles it'll keep your hands moving."

"It's great to go out there and get inspired by other drummers. I was at a Foo Fighters show and even though I got home at 5am all I wanted to do was go practise drums because I'd just seen Taylor Hawkins. You always pick up on things other people do. We played a festival in Germany and the guy from Letlive had some cool stuff he was doing. It's great to listen to new music and get inspired."

"Don't just think, 'I like rock music so I'm going to listen to rock music,' that's so close-minded. There might be a Katy Perry record you love. We played two shows with Katy Perry and her drummer was one of the best drummers I've ever seen. He plays traditional grip and was absolutely phenomenal."

"I quite often - and the other guys in the band tell me I'm really lame for doing it - but I'll often video myself practising at home or I'll set it up on stage and then I can watch back. So say if I think I've done something wrong I can watch it back and say, 'Yes, I did that wrong and I did it wrong because of this.' You can check your technique and learn what you need to work on."