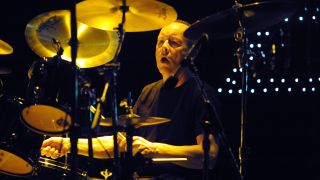 The Boys Are Back In Town, Thin Lizzy's biggest hit, was built on Downey's energetic shuffle. Here's how he did it, according to the man himself.

"Gary Moore was a fantastic guitarist but sometimes he used to get a little loud so I'd have to struggle to get the snare to come through the monitors to get the '2' and '4'."

"Sometimes I just hit the skin and other feels I'd hit the rim. It all depends on the feel we're going for. If you're hitting the rim you really need to crack it out between the shuffle on the snare and the '2' and '4' with the rimshot.

"It sounds great when you get it right, it's a fantastic pattern."

"I mainly stick to the main part of the cymbal. Sometimes you might play the shuffle just on the bell but not with the shoulder of the stick, just the tip.

"I grew up listening to all the old blues guys from America, Sonny Freeman from BB King to the guys that played with Muddy Waters.

"I saw Aynsley Dunbar playing a shuffle in the '60s when he was in a band called The Retaliation.

"I was really influenced by that era. I was a big blues guy and still am."