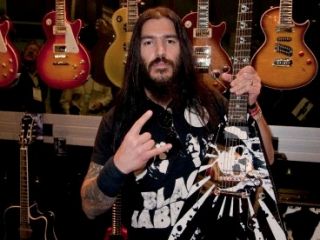 Robb Flynn and co. have been keeping fans up-to-date on progress for the new Machine Head album via a series of in-studio videos that show the band recording and rehearsing.

In the first clip Flynn shows the viewer around the band's new "inspirado jam-room" rehearsal space and a list of new and work-in-progress song titles including: 'This Is The End', 'Who We Are', 'Pearls Before Swine', 'Under The August Moon', 'Wharr Weee Weee We', 'Damage Inside', 'Transsiberian Thrasher', 'I Am Hell', 'The Darkness Within', 'People Of The World' and 'Locust'.

The second mainly focuses on the drum-tracking (yawn!) at Jingle Town Recording Studios in Oakland, California. Still, it's where the rest of the album is currently being recorded and it's got TG's palms sweaty in anticipation of some Demmelition action!