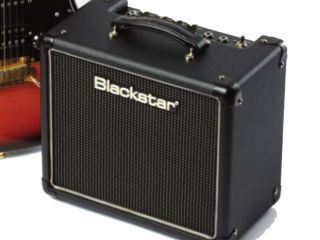 Blackstar has announced its latest model, the HT-1, a one-watt, two-channel, all-valve design for use in the studio or at practices.

As the baby brother to Blackstar's hugely popular HT-5 amp, the HT-1 incorporates many of the same features, such as dual channels, Blackstar's ISF control and a speaker-emulated output that also doubles as a headphone socket.

The HT-1 will be available in three different configurations: the HT-1 Combo (£169, pictured), the digital reverb-equipped HT-1R Combo (£199) and HT-1RH Head (£169, in the video). All three amps should be shipping by late October.

However, if you can't wait that long, don't worry. TG paid a visit to Blackstar's booth backstage at this year's Sonisphere festival, where the HT-1RH was on display for artists to try.

We grabbed our camera and captured this exclusive clip of Iggy And The Stooges' guitarist James Williamson trying the amp.