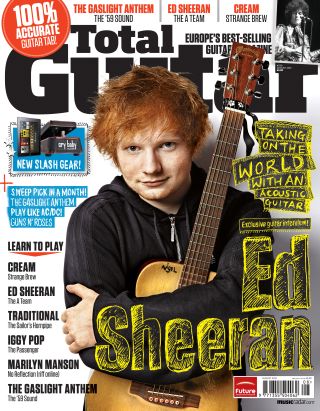 The new issue of Total Guitar is on sale nationwide (and, digitally, around the world) from today. TG230 features an exclusive interview with Ed Sheeran where he tells us about his approach to acoustic guitar, playing live and his early love of Clapton, Guns N' Roses and Green Day.

As well as our cover feature, we also show you how to play Ed's biggest hit, 'The A Team', complete with the full story behind the song from the man himself. If that's not enough, our 'Essentials' lesson teaches you the fundamentals of Ed's acoustic style!

The Gaslight Anthem
Brian Fallon and Alex Rosamilia tell TG all about new album, 'Handwritten' and reveal the reasons for adding third guitarist, Ian Perkins to their live line-up. We also take you on an extensive tour of TGA's gear, plus you can learn to play 'The '59 Sound' in full.

The Vaccines
One of Britain's most exciting guitar bands are set to return in September with new album 'The Vaccines Come Of Age'. Guitarist Freddie Cowan tells us //what to expect// from their latest dose in our studio report.

Guns N' Roses
In a TG first, we sit down backstage with all three of Guns N' Roses' guitarists, Bumblefoot, DJ Ashba and Richard Fortus.

Steel Panther
Want to know which guitar will get you laid? Ever wondered what makes accordions heavy metal? What about how to liven up your gigs by juggling a household pet? It's all inside as we pose your questions to Steel Panther's Satchel.

AC/DC
This month's 'Steal Their Style' focuses on the formidable Young brothers. We talk you through the gear, techniques and even attire you'll need to get started on the highway to hell…

Sweep Pick In A Month
With our no-nonsense workout

Children Of Bodom
It's been fifteen years since Alexi Laiho cemented himself as a shred hero with Children Of Bodom's first album. Here, the man that you voted 'Greatest Metal Guitarist Of All Time' shares the memories of his career so-far.

Bob Mould
Without Husker Du and Sugar, some of alternative rock's greatest bands would sound a lot different. Here are '7 Reasons' why frontman Bob Mould is an alt-guitar legend!

Storm Corrosion
Take two prog-metal masterminds and lock them in a studio and you get Storm Corrosion; the progtastic new band from Porcupine Tree's Steven Wilson and Opeth's Mikael Akerfeldt. In our interview, Steven and Mikael spill the beans on each other's playing.

Gear
19 pages of gear reviews and advice. This issue: