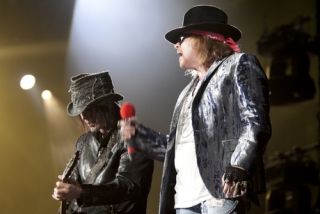 TG headed out to day one of the UK's premier rock event - Reading Festival 2010 - to catch some of the best bands on the planet… And Guns N' Roses.

Having waded across the arena in wholly unsuitable footwear and fretting slightly about the risk of trenchfoot, TG forgot all its woes when Frankie & The Heartstrings took to the Radio One stage to kick-off the festivities. New guitarist Mick Ross (who has taken over from Pete Gofton) showed off ample technique and verve on his Gibson 335, while Michael McKnight held it down with typical quiet charisma on his taped-up Epiphone Wilshire.

Meanwhile, another of TG's new hopes - Young Guns, were making the most of their main stage slot and had drawn a large and devoted crowd, not to mention one of the largest circle pits we saw all weekend. It's a safe bet that they'll be asked back (and probably higher up the bill) next year.

Following a barely-digestible £6.00 burger, back on the main stage, Fat Mike of NOFX spent most of their set talking, apparently using the music to punctuate his banter, rather than vice versa and spent a lot of time trying to convince the audience to see Alkaline Trio instead of Guns N' Roses… A wise man indeed.

By this point, feet were aching, so it was lucky that one of the most talked about bands of the festival, Warpaint, required no relocation. Drawing heavily from their forthcoming album, 'The Fool', the siren-like four piece's enchanting brand of post-rock drew many an admiring gaze.

Opting for Queens Of The Stone Age over Mumford & Sons (you couldn't get near the Radio One tent for the latter) was a move met with smug assurance. Sounding a little loose, following his sabbatical with Them Crooked Vultures, Homme never the less still inspires a sense of danger and, like a man fresh out of his work clothes, happily rolled through a greatest hits set.

Which brings us to Guns N' Roses. We won't go into specifics here, but people (not us, but 'people') paid good money to wait for an hour and a half in a field to watch Axl Rose waltz about during a short-lived and lacklustre set.

By now you've probably heard about the on-stage protests, the repeated and unnecessary costume changes, the over-running etc. We'll just highlight the fact the organisers had been clear from the beginning that they would have to cut the sound or face enormous fines.

Therefore, for Axl to blame their attitude on a personal vendetta of festival head honcho Melvin Benn ("Yeah, I booked your band to headline my festival because I HATE you"), is pretty ludicrous. Unsurprisingly, we had a better time watching Slash at Download than we did watching Axl's ego at Reading.