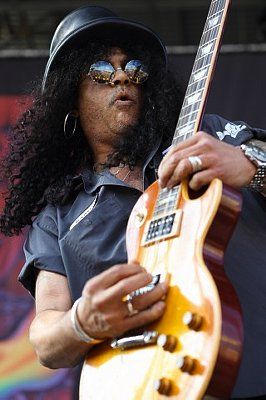 The final day of Download 2010 was all about the classic rock and metal, with everyone from Slash to, err, Cinderella, putting in appearances.

TG managed to get on-site in time to catch our Guitar Wars winner Ben Poole take his much-deserved place opening Download's Pepsi Max stage. Poole impressed Editor Stephen Lawson back in February with his "tone, touch and stage presence" and went on to win a set at Download for his efforts.

Having picked blues-obsessed Poole above numerous shredding talents, we wondered how the guitarist would go down with a hard rock and metal audience. However, we needn't have worried, the audience grew steadily throughout the set and Poole and band seemed to be making the most of their opportunity and having fun with it.

We wouldn't be surprised if Poole winds up the next British Bonamassa or Madonna's live guitarist, but he'll have to continue working on developing his own style if he wants to compete with the big boys of blues.

Following Poole's performance, TG headed back to the press area to prepare for the arrival of Steel Panther axe-man Satchel. We won't give away the content, but it was one of the most entertaining interviews TG has ever conducted. That spandex was a little bit too close for comfort though.

We also caught up with Stone Sour guitarist Josh Rand for a quick chat about their new album, 'Audio Secrecy', which is due out in September. He wore less spandex than Satchel and also spoke a lot less about making love to fat women.

Having somehow crammed 10 interviews into the day, TG managed to sneak out and catch Slash on the mainstage. Perhaps predictably, he was awesome and tore through a set that was surprisingly light on solo material.

The 10 song set featured four Guns N' Roses covers (including 'Paradise City' and 'Sweet Child O' Mine'), Velvet Revolver's 'Slither' and a guest appearance from Lemmy on 'Doctor Alibi'. Slash's playing was, of course, fantastic, but the talk of the festival was more focussed on Myles Kennedy's brilliant vocals.

As Slash left the stage, the clouds drew in and occasional drips turned into a sustained downpour. Back in the press area everything went mental as everyone made a dash for the tent and got to know each other more intimately than desired. Only the most dedicated remained outside (check out the poor chaps from Scuzz TV) and braved the weather and rumours began to circulate that the mainstage was waterlogged.

Fortunately the rain cleared up as Aerosmith took to the stage for their first UK performance in three years, dropping hits like 'Love In An Elevator', 'Cryin', 'Walk This Way' and 'I Don't Wanna Miss A Thing'. As they said in their pre-set interview with Download, "We know what pull out when it's rainy to warm everyone up!"