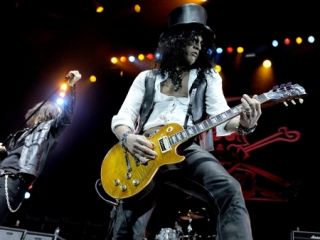 Top-hat fan and all-round guitar genius Slash has revealed that he is already working on a second solo album that he hopes to release in 2012.

Slash told Australian radio station Triple M: "I'm touring around with a sort of mobile studio and we're working on material that I'm gonna do with Myles [Kennedy, Alter Bridge frontman] for the next record. And I'm looking at probably early next year."

It's still early days yet and it's not known whether Slash will be looking to arrange another series of top-flight guest stars for the new recordings. His previous self-titled solo album, released last year, featured appearances from Lemmy, Dave Grohl and Ozzy Osbourne.