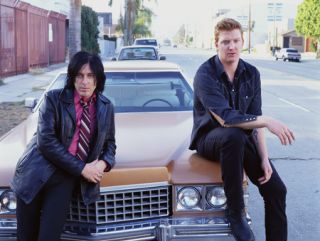 Josh Homme has revealed that Queens Of The Stone Age are planning to record and finish a new studio album before the end of 2011.

The band are currently touring Europe in support of the reissue of their 1998 self-titled debut album, but found time to speak to BBC Radio 1's Zane Lowe, telling the DJ,

"We're going to take our one last break that we would get for a month, come back and do Glastonbury, then immediately jump in the studio. Our record will be done by the end of the year. We have enough songs.

"We're at a weird moment where we really don't feel like we have anything to prove. We just want to play to the people that are into us and we want to play right at them."

It seems revisiting their old material has given Homme the boost he needed to get writing again, but not for the reasons you might expect. As the frontman told Zane Lowe, "I'm not going to lie: I'm sick of doing the first record. We've never played the same set list before."