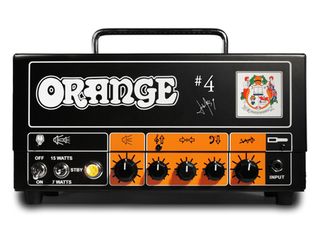 The new 15-watt mini amplifier is modelled after the dirty channel of the Slipknot/Stone Sour guitarist's Orange Rockerverb head and is designed to tackle the heavier end of the rock spectrum.

In keeping with its metal credentials, the Signature #4 Jim Root Terror head is finished in black and features Stone Sour and Slipknot logos (fear not, they're hidden on the back) and the accompanying cabinet is covered in black vinyl.

Aside from the aesthetics, the all-tube head offers a three band EQ and the option to switch the output stage down to seven watts, which will enable more gain at lower volumes.

There's no word on an official release date or price point, but that information should emerge following the amp's official debut at the NAMM show.

Keep an eye on TG for more product news, videos and reports from NAMM 2012.