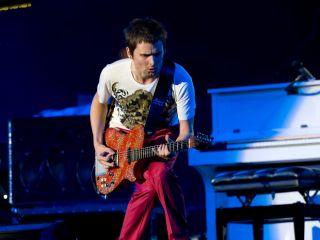 Muse have revealed that they are set to pen their new album, the follow up to 2009's 'The Resistance', after their headline shows at the Reading and Leeds festivals.

Speaking to Radio One, Muse bassist Chris Wolstenholme said, "September and October, that's when we're going to get into the studio to start writing the new album."

It seems that, having wound up a massive world tour in support of 'The Resistance' in May of this year, and then recently undertaking a smaller jaunt in support of the 10th anniversary of 'The Origin Of Symmetry', the band's thoughts are turning towards new material.

"I think by the time you've finished touring an album, which is usually a two-year cycle, it's something you start thinking about a lot," said Wolstenholme.

"It's difficult to bring new songs into the live set before you record them with the internet and dodgy recordings of live songs getting out there before they've been released on an album.

"People tend not to play new songs live any more. That's why we want to get into the studio, make another album and then tour it."