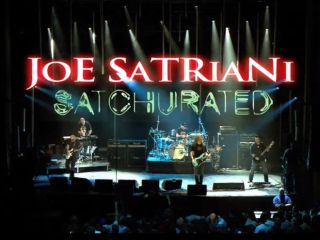 Shiny-headed shred wizard Joe Satriani has unveiled a new live DVD 'Satchurated: Live In Montreal', which is due for release on 9 April, after a run of advance screenings at UK cinemas next week.

The sold-out concert at the Montreal Metropolis was filmed in December 2010 during Joe's 'Wormhole Tour', which was in support of the guitarist's last studio album 'Black Swans And Wormhole Wizards'. Check out the full track list below.

Special preview screenings of 'Satchurated: Live In Montreal', including some 3D screenings, will take place on 6 March at a selection of UK cinemas. Head to www.cinemalive.com for the full list of participating theatres.

In the meantime, you can check out a snippet of the new DVD, a performance of 'War' (from 1992 album 'The Extremist'), in the video above.