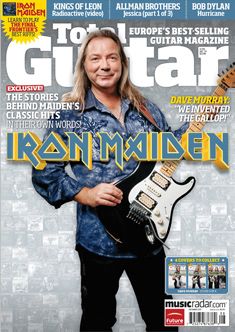 TG208 - an Iron Maiden special featuring four collectors covers - went on sale just over a week ago (29 October) and we've since become aware of an apparent shortage of Dave Murray covers in some regions.

The magazine was distributed randomly across the country (we're not cruel or smart enough to create intentional shortages) and it appears that certain covers are more prevalent in certain areas of the UK.

Currently, it seems that of the four covers Dave Murray's is the most sought after and TG has had eye witness reports of what we've come to term 'Murray flurries' in London newsagents. In contrast, other areas are reporting a slimmer supply of Janick Gers and Adrian Smith issues.

Did you get a Murray issue through your door, become the victor in a Murray flurry or hide a copy for later behind 'Carp Fishing Monthly'? If you've seen Dave we want to know. Just get in touch via our Twitter or Facebook pages and send us a picture of yourself with your issue.

Alternatively, if you're after a copy of the Janick Gers, Adrian Smith or group shot issues, you might be able to trade (at your own risk) with readers in other locations via Facebook.

Read our 11-page Iron Maiden feature (including in-depth interviews with all three guitarists) and learn the best riffs from 'The Final Frontier' in Total Guitar issue 208 (on sale 29 October to 25 November).