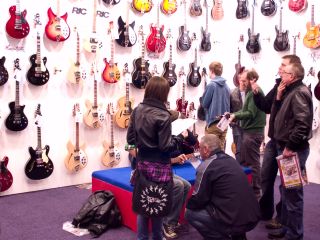 On 25 and 26 February next year, the Great British Guitar Show - formerly known as the Birmingham Guitar Show - will return to the city for its biggest event yet.

Yes, it's a little bit confusing, and it requires us to write the phrase 'guitar show' more times than we've put Slash on the cover, but essentially the show will stay the same and the new name has just been brought in to reflect the fact that players were visiting from throughout the UK, not just Brum.

Once again, the event will take place at New Bingley Hall and, in keeping with the fancy new title, the show's organiser Jason Hunt is promising more exhibitors than ever before.

The likes of Laney, Ibanez, Bose, Fret King, Line 6, Vigier, Rob Williams, Vanquish, Rotosound and Blade have already confirmed, RSVPed and set their status to 'attending' on Facebook and past form dictates a raft of new names being added between now and February.

Tickets for the event are priced at a recession-friendly £10 in advance and are available from www.greatbritishguitarshow.co.uk.