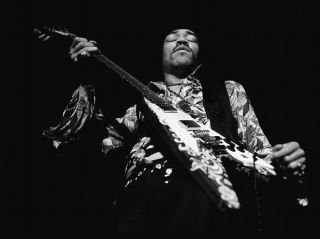 A new photography exhibition, Gibson Through The Lens, featuring an amazing line-up of prints of guitarists past and present by some of the finest rock photographers in the world, opened at the British Music Experience in London yesterday (7 November).

The photographs are the work of some the world's leading music photographers, including the likes of Mick Rock, Ross Halfin, Baron Wolman (that's his Hendrix image above), Neal Preston, David Redfern and Jim Marshall (not THAT Jim Marshall).

In addition, Gibson is hosting a series of masterclasses with the featured photographers throughout the exhibition period, the first of which will be with Baron Wolman this Thursday (10 November).