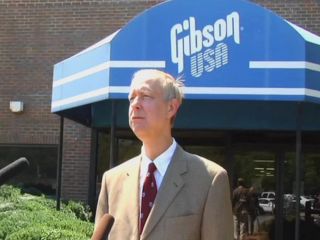 Gibson CEO Henry Juszkiewicz has hit back at the U.S. government following their recent raid on the company's Memphis and Nashville plants, defying a mandate that would effectively halt the production of 95% of Gibson-branded guitars.

The CEO used a press conference to explain that Wednesday's events related to the importation of part-finished rosewood fingerboards from India.

According to Juszkiewicz, Indian law prohibits the exportation of wood that has not solely been worked on by Indian workers and that, as Gibson guitars (and fingerboards) are assembled in the U.S., the firm is technically in violation of Indian law.

The Justice Department took action under the U.S. Lacey act which states that all laws of the countries from which wood products are procured must be obeyed and have since told Gibson:

"The United States considers all items containing such woods, including guitars - both finished and unfinished, to be prohibited for sale or transport across state lines pursuing to the Lacey act. Please be advised that each instance of sale or transportation of such items could be considered an additional violation of the Lacey act."

This, says Juszkiewicz, means that technically both plants - which between them produce roughly 95% of Gibson-branded instruments - will have to halt production in order to avoid contravening the Lacey act, a decision the CEO regards as untenable:

"Supposedly every guitar that we build is a technical criminal violation," Juszkiewicz told press.

"I have taken personal responsibility and instructed our staff to continue building the product… We are noticing the Justice Department and I have taken that step and made that decision and we'll see what they do."

According to the CEO the total dollar value of the confiscated materials and guitars taken in both the 2009 and 2011 raids is near $1million.

You can watch a video of some of Henry Juszkiewicz's press conference below.

In addition to the press conference the firm has also released another written explanation of the events, read the full Gibson press statement.