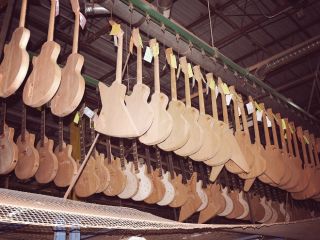 The US Fish and Wildlife Service has raided Gibson Guitars' two US factories in Nashville and Memphis as part of an investigation into the company's alleged importation and use of illegal woods.

The first raid, back in November 2009, resulted in the confiscation of guitars and wood stores that the authorities suspected had been sourced from endangered rainforests in Madagascar.

Both federal agents and manufacturer are keeping quiet about the specific motivations of this latest raid and Nicholas Chavez, special agent in charge with the US Fish and Wildlife Service, told press: "We can't get into specifics right now. This is an ongoing investigation."

In addition, MyFoxMemphis recorded some footage of the raid on the Memphis plant and reports that employees were sent home for the day and agents were seen loading a trailer with materials from the factory.

Gibson Guitars has yet to comment on these latest actions, but is still fighting the federal lawsuit that resulted from the 2009 Nashville raid.