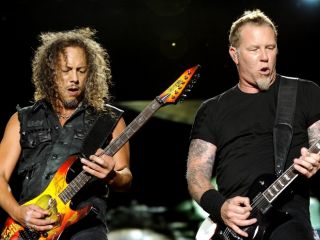 Yesterday evening saw the first Download 2012 announcement with the news that Metallica will headline on Saturday and play The Black Album in full.

There were strong rumours of a Metallica appearance at next year's event after it leaked that drummer Lars Ulrich was due to appear on Radio One at roughly the same time that Zane Lowe was scheduled to make a "huge announcement" regarding the festival.

The news will likely come as a relief to Metallica fans though. After rumours began to emerge, many suspected they would see the band performing divisive new album 'Lulu', which (contrary to collaborator Lou Reed's belief) is definitely not "the best thing done by anyone, ever."

The announcement has no doubt proven to be a double-edged sword for the Download organisers though, as TG distinctly remembers that earlier this year head honcho Andy Copping implied that the band were overexposed.

"Metallica have toured extensively and have been here for seven of the last eight summers…," he told www.RockAAA.com back in March. "If they went away for three or four years then came back then they'd be even bigger. When they keep coming back they become boring."

In his defence, Copping has repeatedly made the point that there are a lack of new headliners coming through. We just wish he'd said something like, "If I book Metallica next year, I'll eat my hat." Which would have seen off that Stetson.

Official, gift-wrapped, hand-stamped, "well done and thanks for listening" brownie points for Metallica though. Keep an eye on TG for more Download 2012 festival announcements and news.