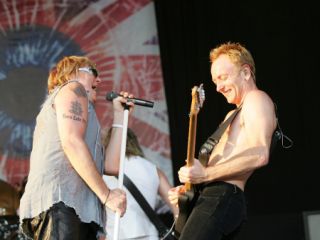 Andy Copping, the man in charge of Download Festival's line-up, has acknowledged a fan backlash over his decision to book classic rockers Def Leppard.

Speaking to RockAAA.com Copping implied that music fans are bored of Metallica, who are headlining Sonisphere - Download's festival rival.

"Metallica are a great band, make no bones about it," said Copping. "But I've been vilified for Def Leppard when Metallica have toured extensively and have been here for seven of the last eight summers… If they went away for three or four years then come back then they'd be even bigger. When they keep coming back they become boring."

Copping also compared the controversy to that which arose over his decision to book AC/DC for Download 2010 and said that he believes in the strength of his convictions.

"I booked Def Leppard because they deserve it," said the organiser. "[And] because they are big enough to do it… We always want to have a classic rock element on the main stage one day as it has been massively successful."