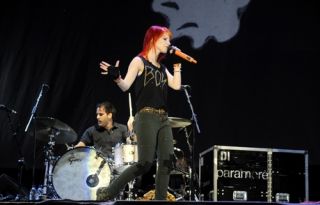 All-conquering US punks Paramore are back in the UK this week for a batch of dates, and according to drummer Zac Farro they'll be the band's biggest yet.

Zac told us: "You should expect to see the biggest shows we've ever done. We've put a lot of time into this show so it's going to be pretty big for us. And we'll be playing some songs we haven't played before live and doing things a little bit differently to previous tours.

"The new songs will be songs from Brand New Eyes that we haven't played in the UK or maybe some old songs we haven't done in a while. Just changing it up a little bit because we've been doing the same songs in rotation for a couple of years now so we're just trying to add new ones. But the most unexpected thing about the show will be the amount of production, videos and lights we'll have."

Paramore's UK tour continues through Liverpool, Sheffield and London this week, before heading to Birmingham, Newcastle, Manchester and Aberdeen.