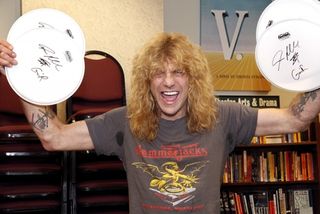 After last week saying that he'd love the original Guns N' Roses line-up to reunite, Steven Adler has told VH1 that there's no chance that they'd do so without Axl Rose.

When asked if there could ever been GN'R with Steven, Slash, Izzy Stradlin, Duff McKagan and a new hired gun, Adler was pretty clear that it was a non-started without the kilt-clad screamer.

He said: "No, no, never, no, no, that's ridiculous. Appetite for Destruction is one of like five records that is still selling 20, 30 years later and is still popular. That shows right there how difficult it is to find four or five of the right people that can make that magic, that special magic."

The likelihood of any kind of reunion looks pretty remote, as Axl has this week announced a trio of UK tour dates. You can catch his GN'R in London, Birmingham and Manchester in October.