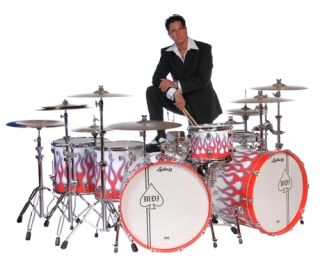 He was a YouTube smash with his incredible 'This Drummer's At The Wrong Gig' video and now Steve Moore has taken to our TV screens, scoring a cameo appearance in the US version of The Office.

You can see Steve's awesome guest spot here, and then take a look below to see how the whole thing came about.

Steve explains: "Several weeks ago I received an email from the casting department of the TV show The Office on NBC, asking if I would like to be on the show. It took some fancy routing, as I had a show in Indiana only a few days later, but we managed to work it out. So I packed my clothes, jumped on a plane, and headed for L.A.

"It was a fantastic experience, and everyone was extremely kind hearted and generous. It was also interesting to see what a cast of that size does "off the camera." They were all very funny people, and acted much like the characters they play on the show.

"However, the best part for me was not shooting the show. My life is very hectic with a full schedule, yet I try my best to stay in touch with as many people as possible. It was a very special feeling watching myself play drums on national television, knowing that everyone from my family and friends, to band members and fans, were ALL watching with me at the same time. We were out on the road, so I watched it in my hotel room alone. However, I knew we were all watching it "together." What a special feeling!"